Good guys don’t always win, which was evidenced this past weekend when Abraham Korotki, one of the biggest heels in poker, took down his second World Series of Poker Circuit Main Event title. Korotki topped a field of 341 entrants to win the WSOP Circuit Harrah’s Atlantic City for $117,645. 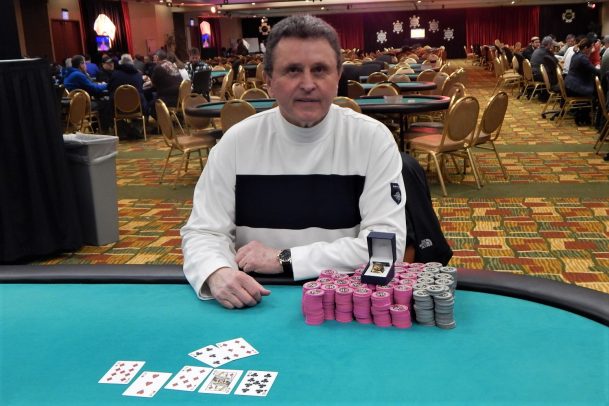 The Man Who Won a Ladies Event

Korotki, who previously won the $10,000 buy-in 2006 WSOP Circuit Harrah’s Atlantic City Main Event for $433,008, has had plenty of success in Atlantic City, which is also where infamous poker cheat Christian Lusardi operated. In 2014, he outlasted 414 entrants to win the Borgata Spring Poker Open Championship for $256,508, and in 2009 infamously won $300 Ladies Event at the same venue. It was a win that turned Korotki into a poker villain.

It wasn’t so much that he entered or even won, but the manner in which he did it. Despite dissuasion from tournament organizers, who were bound by New Jersey law to allow him to play, Korotki entered the event and wound up making it to heads-up play against Nicole Rowe.

Rowe, who was slated to undergo breast cancer surgery just a couple of weeks later, was hoping to secure funds to help her during her recovery, so even stacked she offered Korotki a chop. He declined and went on to win the tournament for $20,892.

“It’s always nice to win a tournament,” Korotki told the Borgata Poker Blog after his win. “The ladies played very well and it’s always nice for the weaker sex to have a victory.”

While his actions made him a hated figure among many, Korotki did say that he would donate his ladies event winnings to charity. Whether or not that actually happened remains to be seen.

Aside from the Main Event, there were 11 other gold ring events at the WSOP Circuit Harrah’s Atlantic City. Usually that would mean 11 different winners, but at this stop poker pro Daniel Buzgon improbably won two events in less than a week.

“The only reason I am playing today is because of, trying to win Casino Champion, and it was crazy how it came down,” Buzgon told WSOP officials.

Heading into the final two tables in the latter event, four players remained in contention for the WSOP Circuit Harrah’s Atlantic City Casino Championship, an honor that bestows a $10,000 seat into Global Casino Championship. Two bowed out before the final table, but poker pro Vinny Pahuja, who last year finished third in the WSOP Circuit Harrah’s Cherokee Main Event, was there to give him a run for his money.

“Vinny shoved and I had a really good hand and I didn’t know what to do, pretty much because of all the side action riding,” said Buzgon, who ended up claiming the title with his win. “It was a lot more stressful this time around, but I ran just as well, so it didn’t really matter.”

Here’s a look at all those who won gold rings at the WSOP Circuit Harrah’s Atlantic City stop:

The WSOP Circuit it now at Hard Rock Tulsa where it will hold 12 more ring events through March 27.