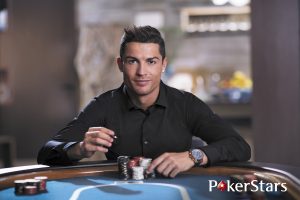 Cristiano Ronaldo and Breaking Bad’s Aaron Paul have been putting their poker skills to the test in a new series of heads-up matches.

Continuing its mission to appeal to a wider audience, PokerStars recently pitted its biggest sponsored pros against a selection of media darlings.

Each celebrity was given a few pointers by the likes of Vanessa Selbst, Felipe Ramos and Andre Akkari, but when the matches got underway they were left to their own devices.

Unlike traditional heads-up showdowns you’d see on the European Poker Tour (EPT) or World Poker Tour (WPT), the “Duels” were designed to be much more TV-friendly.

Taking a leaf out of the Global Poker League’s book and focusing on production value and entertainment, the videos feature talking heads, dramatic scenery movie-like soundtracks.

While some of the moves on display aren’t quite at the same level as the pros, the videos are designed to be about more than high level strategy.

The winner of each match was able to claim $5,000 for their chosen charity, but beyond this the videos appear to be aimed at casual fans.

Between them, Ronaldo and Paul have more than 48 million Twitter followers and this social media following is exactly what PokerStars will be looking to exploit with its new videos.

By combining well-known celebrities, poker and dramatic production elements, the videos are not only more entertaining but they help paint the game in a less serious light.

This move to appeal to novice players has not only become PokerStars’ raison d’être in 2016, but the industry as a whole.

Harnessing the mass-market appeal of mainstream celebrities, offering games such as Spin & Gos as well as combining casino and poker in a single platform are clear examples of how the industry is now catering to casuals.

For sites like 888poker, which has also enlisted the services of ex-soccer star Denilson earlier this year, this movement away from hardcore grinders and towards beginners has helped it rise up the traffic rankings.

In fact, in line with this current shift, PokerStars recently announced the rebranding of its live tournaments.

Doing away with the EPT in favor of PokerStars Championships and Festivals, the new dual system is designed to offer something for players at both ends of the skill spectrum.

Championship events will use a format similar to the soon-to-be replaced EPTs, while festivals will be aimed squarely at recreational players.

Taking place over a single week, the tournaments will have buy-ins ranging from $1,000 to $1,500 which puts it within the reach of more players’ bankrolls.

Although some players have been critical of this new marketing angle, the reality is that poker constantly needs fresh blood.

PokerStars’ Duels are the latest attempt to bring new players into the game and that should be something players of all persuasions should be happy about.

If the industry wants to appeal to the recreation players and novice ones they aren’t gonna do it by celebrities.

It should be done with the very players they are trying to appeal to.
Use marketing towards them using them in the marketing itself.
To me its called what everyone knows” The Money maker effect”. He was a novice , recreation player they can all connect with. He’s like them. You know what happened when he won the WSOP.

The marketing should revolve around them just like the new formats they are doing now to accommodate them. Why to do it using the rec players?

This form of poker will surely find the admirers! Ronaldo – well done!