A Newbie Team CardsChat Player at WSOP 2014: His Story

Now that it’s all over but the shouting for another year, we bet you’re already thinking about how you can get to next year’s World Series of Poker live and in person. Our own Elbert Pruitt did just that, and brings you his perspective as a first-timer and Team CardsChat player here.

You’ve followed chip counts at WSOP.com from your work computer (admit it). You’ve watched new champions rise from the November Nine on ESPN to claim millions and a diamond-studded bracelet. But what is it really like for an average guy without a massive bankroll to play in The World Series of Poker? I’m going to tell you.

First-time WSOPer Elbert Pruitt recounts his experience at the Rio in Las Vegas, and talks about the thrills and chills of playing in the biggest tournament series there is. (Image: WSOP)

On July 2nd, I traveled to Las Vegas as part of Team CardsChat to play The Little One for One Drop, a No Limit Texas Holdem tournament benefitting Guy Laliberte’s charitable One Drop foundation, which aims to make clean water available to everyone. A poker player himself, Laliberte is also the co-founder and CEO of Cirque du Soleil.

You Only Live Once

Advised to register early, I went to The Rio cages the night before the tourney and surrendered $1,111 to a well-wishing cashier. A CardsChat rebate made the transaction easier, but I had only one bullet for the rebuy tournament and hoped to make it count.

Before noon the following day, I took seat 6 of Table 80 in the Brasilia red section. I was arranging my chips when the successful Allyn Jaffrey Shulman sat down across from me. She wore a gold WSOP championship bracelet [for her Seniors Event win this year], and I wondered if this was the closest I’d ever get to such a prize.

Actor and poker player James Woods dropped by to greet Shulman before settling in at a nearby table, and a short time later we heard Tournament Director Jack Effel command: “Dealers…shuffle up and deal!”

Welcome to the Jungle

Allyn quickly went to work on her opponents, raising several hands in a row and showing good cards; she was no doubt setting us up for future plays. By contrast, I was running badly, but finally took down a small pot with 6-8 of clubs, and hoped to steadily chip up. 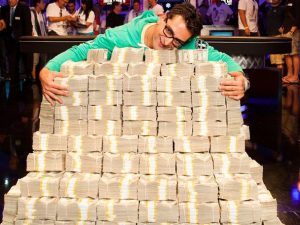 Our boy Elbert didn’t come home with $18M like Antonio Esfandiari did in 2012, alas, but he learned a lot about what to do, and what not to do. (Image: WSOP)

As the tourney progressed however, my hours were numbered despite winning a large pot with a set of nines against top pair. By Level 5, I needed a miracle and picked up king jack offsuit in the small blind. The hand folded around and I shoved eleven bigs for my tournament life.

The villain on my left tabled ace ten offsuit for the advantage. We both bricked the board and after four hours of play I struck out to ace high. Ouch… Busting a tournament is never fun, but at least there was comic relief in the hallway later as brothers Ralph and Aaron Massey swerved through the crowd on a mobility scooter made for one.

After playing tournaments at Planet Hollywood, I returned to the The Rio Saturday night to witness Flight 1A of the $10,000 entry WSOP Main Event, where prior champions Ryan Riess (2013) and Greg Merson (2012) were seated at the ESPN featured table. 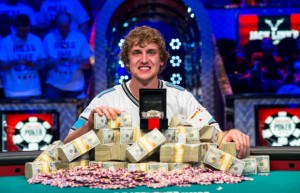 Getting to see 2013 WSOP Main Event champion Ryan Reiss up close was one of several poker celebrity thrills for our author on this trip. (Image: WSOP)

The defending champ looked confident and happy. His girlfriend and several supporters were on the rail wearing the classic Riess The Beast t-shirts, and a news crew waited patiently to interview him. Several more elite players were also competing that day: Johnny Chan, Antonio Esfandiari, Tony Dunst, and Annette Obrestad to name a few.

In The Gold Corner

Across the Amazon Room, Little One Drop edged toward a final table as players gradually busted out. Contender Maurice Hawkins kept the rail entertained with animated banter and an occasional dance move. 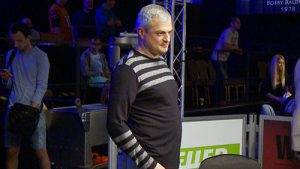 Russian poker pro Igor Dubinsky took down the Little One for One Drop; next year, our author hopes to try again. (Image: calvinayre.com)

After returning home Sunday evening, I pulled up the live stream at WSOP.com to watch the last three rivals compete for first place. David Tuchman delivered the action as Igor Dubinsky of the Ukraine ultimately captured all of the chips, $637,539 in prize money, and his first WSOP gold bracelet. The tournament was a clear win for the world and the poker community, raising $499,056 for One Drop.

Despite my own result, the overall experience as a first-timer at WSOP was one of excitement, intimidation, education and fun. Simply walking the halls of The Rio among the legends of poker was enough to inspire me to gear up for a return trip.

That being said, here are some things I will do differently next year:

Play as many live tournaments as possible before the WSOP.

Prepare for the long grinds by getting into good shape.

Plan to rebuy at least once.

Lastly and hopefully, I will run well and play well; because it takes a little luck and a lot of skill to win at The World Series of Poker.

Nice article Elbert! We both lost money, but we had a good time and want to come back again next year.