This past weekend’s $1,050 Main Event for the XL Inferno Championships featured a $1.5 million guarantee that was easily surpassed, thanks to 436 rebuys from a field of 1,319 players. That eagerness to put more chips on the table created a final prize pool of $1,755,000 prize pool, the largest offered in 888poker history. 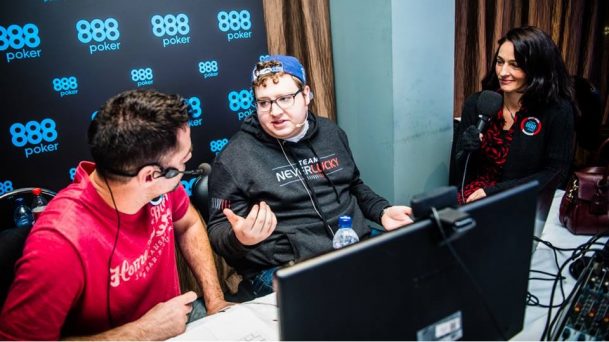 It was the second record of the week after the $5,200 buy-in High Roller became the biggest buy-in tournament ever held on 888Poker.

With so much money on the line, it was little surprise to see the XL Inferno Main Event attract some current superstars, including 2011 WSOP Main Event champ Pius Heinz (“AMasta89”), November Niner Kenny Hallaert (“SpaceyFCB”) , and micro-celebrity vlogger Doug Polk “DougPolkPKR”, who streamed his play on Twitch.

Polk made a deep run, finishing 27th for $7,020. And he might’ve gone much deeper had it not been for a bad beat. Polk ended up getting it all in preflop with A♦K♠, only to lose to A♠J♣. That left him with a few chips, but they disappeared a short time later when he lost a flip with A♣10♥ against the 6♥6♣ of “TigerVincent.”

At the final table, Austria’s “Alien_Army” and the Czech Republic’s “stevachenko7” made a deal that saw them each guaranteed more than $225k while leaving $30,000 and the title on the table. Eventually, they got it in with “stevachenko7” holding K♠K♣ against the Q♦4♦ of “Alien_Army.”

A double seemed certain for “stevachenko7,” but a 4♠9♠10♦ flop made things interesting as “Alien_Army” flopped a pair and backdoor draws. When the 4♣ spiked on the turn to give “Alien_Army” trips, it left “stevachenko7” looking for a king on the river. It wasn’t in the cards though, as the 8♥ bricked on 5th Street.

On Day 14 of XL Inferno, all eyes were on 888poker Ambassador Parker Talbot (“888tonkaaaa”), who was streaming his play on Twitch. The Canadian went deep in Event #169, called $15,000 Breeze, which drew 366 players and surpassed the advertised guarantee by creating a $18,300 prize pool.

Unfortunately for his fans, he fell short of the title and had to settle for third place. Instead, Italy’s “Roma4892” emerged victorious, capturing a $3,511.77 first-place prize.

Finishing runner-up was Bulgaria’s “Noob3R1337,” who last year finished third out of 1,433 players for $20,398.75 in the Super XL Mini Main Event. If you recall, that event was won by 888poker Ambassador Dominik Nitsche.

The XL Inferno will officially wrap up on Wednesday with the “Champion of Champions,” which is restricted to players who’ve won an XL Inferno Event. The top three finishers in that tournament will win their way to the 2017 World Series of Poker, which 888poker is sponsoring for the third year in a row.

I read your site every day to see what is going onin the poker world. But I don’t write to many things about my thoughts of the news jus like to read them. ive been on the site but I never see anything about how to get the pass word to play n ACR .But I like the e-mail I get from ypur site on the poker world happenings. At least somebody is winning on online poker sites. I get killed on them all the timemaybe because I play small money tables and tournaments. Any advice???