Since its inception in 2007, One Drop has raised millions of dollars to help bring sustainable access to safe water to more than 1 million people in 11 countries. 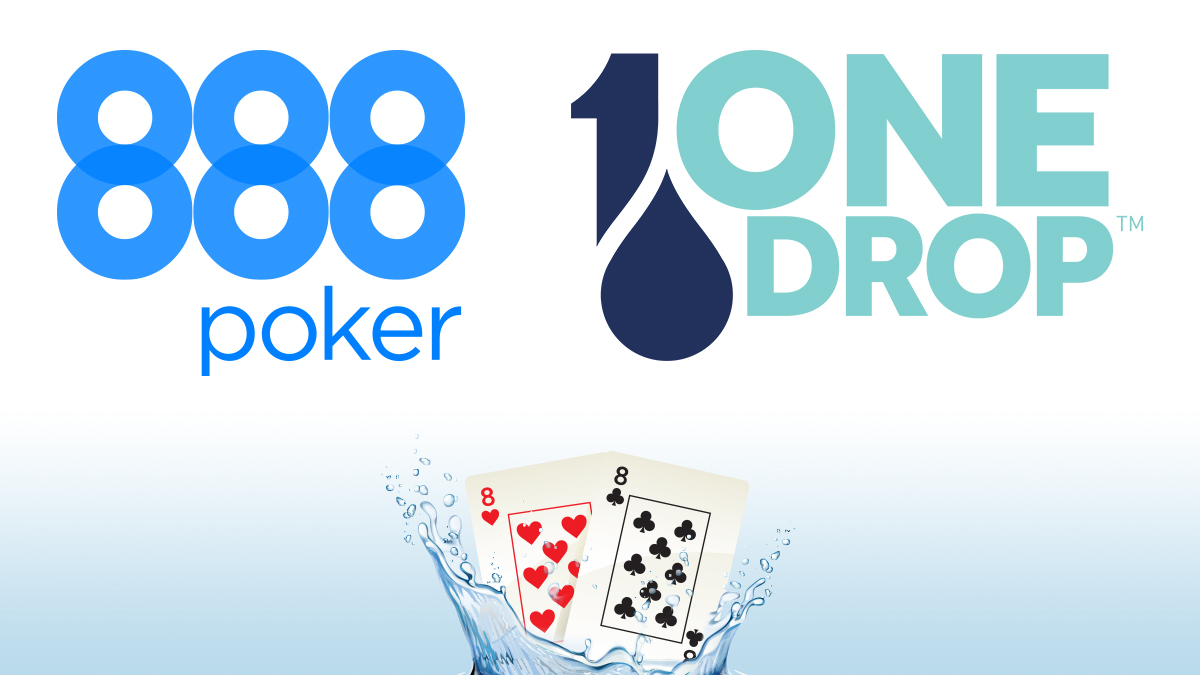 This year, One Drop is celebrating 10 years of bringing sustainable access to safe water to people around the world with projects in 11 countries that will reached over 1 million beneficiaries. (Image: 888poker)

Now, they’re linking up with 888poker for the first time to raise awareness and funds via the World Water Day Online Tournament.

Online Poker Gets Wet and Wild

888poker will host the World Water Day Online Tournament at 20:00 GMT on Thursday, March 22 – the United Nations-sanctioned World Water Day – with the goal of offering maximum fun while raising awareness and funds for the more than 2.1 billion people in need of safe water and sanitation.

The World Water Day Online Tournament will cost $11.11 (410 + $1.11) to enter and offer up a $5,000 guaranteed prize pool. Players will start with 5,000 in chips and second chance rebuys are available during late registration. 888poker will be donating all fees collected from the tournament to the One Drop organization.

Not only that, Guy Laliberté and Cirque du Soleil have pledged to match 100% of funds collected through the One Drop poker tournaments and initiatives, including the World Water Day Online Tournament.

“Our new collaboration with One Drop is a great milestone for us here at 888poker,” said Guy Cohen, SVP Head of B2C, 888 Holdings. “Supporting causes that improve the world we live in is an important part of our activities. We are excited to be able to offer our players the chance to contribute to those in need, along with exclusive access to the most sought-after events in the poker calendar.”

The partnership with One Drop is just the latest for 888poker, who just announced they’re returning as the sponsor for the Swedish Poker-SM Online Championship Series (PSMO). In the last year, 888poker has formed partnerships with the German High Roller TV cash game, WPTDeepStacks Europe, and renewed their sponsorship deal with the World Series of Poker.

One Drop first joined forces with the poker world back in 2012 with the $1,000,000 Big One for One Drop, which saw Antonio Esfandiari come out on top to win more than $18 million.

Since that inaugural event, the poker community has raised over $20 million for safe water projects, which have benefitted 170,000 people, around the world.

Most recently, 888poker Ambassador Dominik Nitsche won the WSOP Europe $111,111 High Roller for One Drop for more than $4 million. The German has already indicated he will also be in action this summer when the $1,000,000 buy-in Big One for One Drop returns to the 2018 WSOP.

Coincidentally, 888poker and the WSOP have been partnered for several years, and now they’ve developed a relationship with One Drop.

“This will be One Drop’s first online poker tournament ever and we are confident that we have found another great ally in 888poker,” said Alexandre Meunier, Senior Director of Special Initiatives at One Drop.

“We are excited with the idea of being able to reach out to their extensive community of online players to raise awareness and funds for critical water issues. We sincerely hope that this collaboration will be the first of many more to come.”

Both One Drop and 888poker will be doing real-time giveaways during the tournament on Twitter at both @OneDrop_All_In and @888poker.

I like this idea pretty much. I think it is always good to support such projects also with poker tourneys.
But what would be even better, if they would offer such charity tourneys on several limits, so that even more people would participate in my opinion. I dunno, maybe one at the micro, one at midlle and one at high limits.

Great idea! Indeed, if such tournaments are held at all limits, more people will be able to participate in such actions. I would participate with great pleasure.