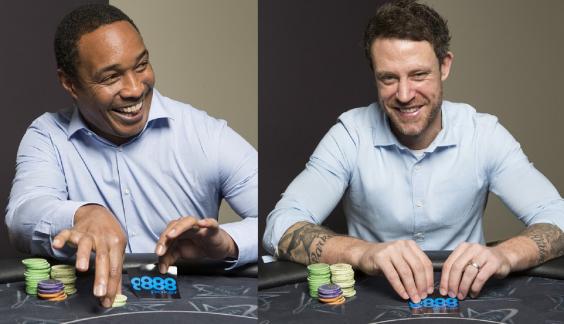 888poker has launched a new #HEADSUP poker series featuring retired British sports stars Paul Ince and Wayne Bridge battling it out on the felt in the series premiere. (Image: Standard.co.uk)

888poker has launched a new monthly video series featuring famous athletes battling it out on the felt.

The online poker operator’s goal is to attract sports fans to the game, and ride the wave of the interweaving of the two pastimes that has been taking place of late.

During the match, and this is going to be the standard format for the video series, the players discussed topics ranging from David Benyamine’s skills, pranks, and the worst poker opponents they’ve faced. If you can decipher their fairly thick accents, you’ll get all that, anyway.

The play between Ince and Bridge won’t make any poker training academy lessons, but the game itself isn’t the main focus of the video. Neither, apparently, is the set’s lighting: we had to tilt our laptops to make out faces in the dark shadows.

888poker is using this monthly series to lure in more players, likely recreational players and sports fans, to its poker site. We’re guessing film majors will not be among those fans.

888poker isn’t the only major poker brand to market using athletes, of course. PokerStars has realized the enormous potential of hiring sports celebrities to lure in the sports audience.

Team SportStars is a group of athletes PokerStars signed on to head the site’s push to gain more customers that are sports fans. The list of athletes includes Ronaldo, Cristiano Ronaldo, Neymar Jr., Marcus Hellner, and Fatima Moreira De Melo.

Although the athletes will never replace poker icon Daniel Negreanu as the face of PokerStars, parent company Amaya views the partnership with well-known soccer players such as Ronaldo as a way to dip into another enormous and potentially lucrative demographic.

888poker, a PokerStars competitor, with the launch of #HEADSUP, is attempting to reel in its own part of that sports audience.

Poker and sports are beginning to mix together as easily as peanut butter and jelly. Many poker players have either jumped ship to the daily fantasy sports world or now compete in both games.

Alex Dreyfus, he of Global Poker Index fame, is set to introduce the Global Poker League to a worldwide audience. His new poker league will, as he calls it, “sportify” poker.

Dreyfus plans to build a league around 12 teams that will compete in poker matches over the course of a 14-week season, in a stadium-like setting, comparable to sporting events.

Innovating is something Dreyfus has said the game of poker desperately needs, which is his reasoning for creating the Global Poker League. He has acknowledged in conversations with CardsChat that for the GPL to succeed, casual poker fans and sports fans will need to be on board.

888poker will clearly be using #HEADSUP as a way to grow its customer base.

Future #HEADSUP participants are unknown at this time.