888poker is adding the Russian Poker Tour (RPT) to its partnership deals. The popular online poker site made the announcement in a press release this week. 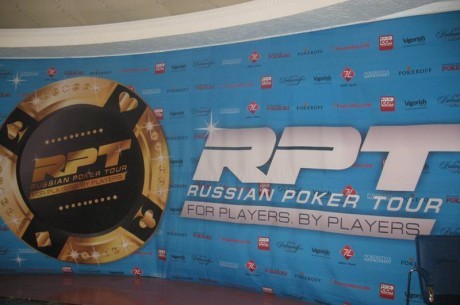 888poker has partnered up with the unRussian Russian Poker Tour.  (Image:  runpokernews.com)

Oddly enough, the Russian Poker Tour doesn’t actually take place in Russia. The country which Vladimir Putin runs had reclassified poker as a form of gambling back in 2009, making it illegal for Russian citizens to play, online or offline.

As a result, RPT events are held in non-Russian Eastern European cities. The next RPT event will take place in Minsk, the capital of Belarus. Tournament dates are set for April 9-18.

The 888poker RPT Main Event will kick off in Minsk on April 15, with a winner crowned three days later. 888 already has its logo plastered all over Russianpt.com, the RPT’s official website.

The Russian Poker Tour was formed in 2009. It doesn’t have the prestige of the World Poker Tour or World Series of Poker, but it’s crafted a niche market in Eastern Europe and Russia. Since 888 sponsors the tour, poker players can attempt to win a seat into RPT events online at 888poker.

To Russia with Love, Maybe

It may seem a bit odd that the Russian Poker Tour takes place in countries other than the motherland. That’s sort of like the Chicago Bulls playing home games in Miami. But there may yet be an opportunity for the RPT to host some events in Russia down the road.

The country is currently reconsidering legalizing online poker and reclassifying it as a sport once again, not as a form of gambling. In 2007, Russia made this classification, but deemed it a form of gambling in 2009.

Poker isn’t regulated in Russia, but is technically illegal. But according to a recent study by the International Business Times, a global business news website, approximately 20 percent of adults in Russia play poker, despite the potential legal issues.

PokerStars, the world’s most popular online poker site, claims 8.4 percent of its customer base resides in Russia, a country with 144 million citizens. This, even though the site, along with many others, is officially blacklisted there. By using VPNs and Tor, dedicated players can find ways around that, though.

Lawmakers have been considering regulating and taxing online poker sites in Russia. The International Business Times (IBT) estimates doing so could bring in billions of dollars for the country. Such legislation very well could make it possible for the RPT to host events in the country for which it named.

All Over the Map

888poker has been stamping its name globally recently. The poker site sponsored three players from last year’s WSOP Main Event final table, including 2015 champ Joe McKeehen. It also signed on as an official sponsor to the world’s largest poker series, the WSOP.

Even more recently, 888 hired Kara Scott as an ambassador. Scott is one of the most recognizable faces in poker media. Partnering with the Russian Poker Tour is another major marketing move for 888poker.