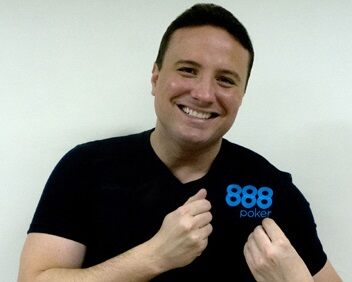 Sponsorships for professional poker players are rarer in the poker industry since Black Friday and the collapse of Full Tilt Poker, but a few online poker companies have continued to sign poker pros to deals that involve the representation of their brands online and in live events.

PokerStars has the most pros on its Team PokerStars roster but recently parted ways with three Latin American poker players.

Meanwhile 888poker continues to thrive and signed several new players, one of which is a member of the World Series of Poker Main Event final table, better known as the November Nine.

Bruno Politano is one of the November Nine. While he has the shortest of the nine stacks of chips, he had the loudest and most excited rail of friends and fans at the WSOP playdown during the summer in Las Vegas. The Brazilians are known for celebrating boisterously, and they came out in droves to support fellow Brazilian Politano as he made the coveted final table.

The 31-year-old was not a professional poker player when he played the WSOP this summer, rather a person who called poker a hobby while maintaining a living as an administrator in his home of Fortaleza, Brazil.

Now guaranteed more than $730K, however, and playing in November for the top prize of $10 million, Politano has chosen to dedicate a bit more time to the game he loves. He will represent 888poker online and in Las Vegas in November.

He also announced in a Twitter message that he joined fellow Brazilians Nicolau Villa-Lobos and Bruno Kawauti on the team. The latter was the latest ambassador to sign with the site, along with Politano, this week.

The recent departure of eight-year member of Team PokerStars Pro Humberto Brenes of Costa Rica was widely reported by poker media due to Brenes’ willingness to talk about the inability of the two parties to renegotiate a contract.

What was reported by only a select few media outlets was that two other members of Team PokerStars Pro Latin America were also not signed to renewed contracts. Argentinian poker pro and two-time Latin American Poker Tour champion Jose Ignacio “Nacho” Barbero was a fan favorite and common face at poker tournament around the world, especially in Latin America, but his contract was not renewed.

In addition, Angel Guillen of Mexico, who had been with PokerStars for several years and traveled around the world to play and represent the company, was let go as well.

A PokerStars representative did say that a shift in policy for the Latin American region led to the decisions, as well as budget cuts for that part of the world. He indicated that more cuts from other countries around the globe may follow, as most countries should only have one representative player.

Guillen and Barbero have yet to speak publicly to American media about their departures from PokerStars. It also remains to be seen if they will try to partner with any other online poker sites or remain free agents going forward.