Starting Saturday, September 17, 888poker will be hosting a mega online poker series with at least $4 million in prize pool money guaranteed. The event will last until September 25. Since 888poker’s global site isn’t available in the United States, American citizens are ineligible to play. 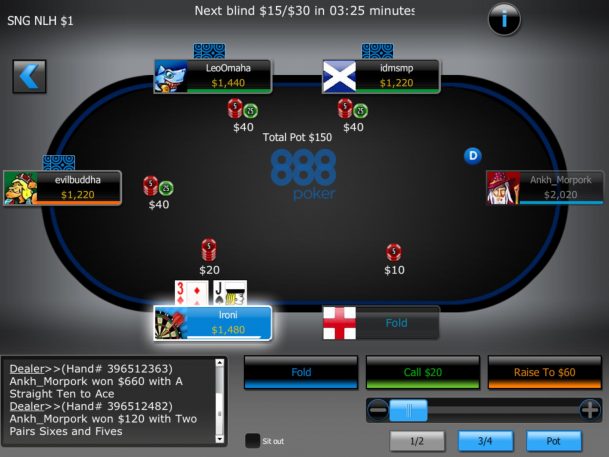 Those living in places where online gambling isn’t restricted will have an opportunity to compete in a series of low and high stakes tournaments over this eight-day period. The event is one of the largest in the poker site’s history.

It all kicks off with a trio of low buy-in tournaments ranging from $8.80 to $88. The most “expensive” tournament on that day, Crazy 8 Super XL Kickoff, has a guaranteed minimum $100,000 prize pool.

Things get a bit spicier the next day when there will be a few low buy-in tournaments again, but also four events that cost $160-$600 to enter.

The $600 tournament has a $250,000 guarantee and will attract the higher stakes online MTT players.

Tuesday, September 20 is the day the high rollers will be logged onto 888poker. A $2,100 buy-in High Roller tournament with a $500,000 guaranteed prize pool is the most expensive event of the series.

But the biggest tournament takes place on September 25. The $1,050 buy-in Main Event, a no-limit hold’em tournament, is guaranteed to pay out at least $1,500,000 in prize pool money. Thousands of players are expected to sign-up for this tournament, one of the biggest in 888poker history.

Those who wish to enter the Main Event without paying the $1,050 can attempt to get in via a satellite tournament. Prior to the start of the event on the 25th, a $215 satellite will be available with 50 Main Event seats guaranteed.

The Super XL Series is 888poker’s version of the WCOOP, but on a smaller scale. While a $4 million guaranteed series may seem like a heck of a lot of money, it pales in comparison to the WCOOP.

One WCOOP tournament, the $102,000 buy-in Super High Roller, had a prize pool of more than $2 million. The Main Event has a $1.5 million guarantee…for the winner, not the entire prize pool.

But for 888poker, a poker site that has grown drastically in popularity in recent years, the Super XL Series will likely draw a great deal of attention to its brand.

Since the demise of Full Tilt, PokerStars has hosted most of the biggest online poker events. But 888poker, with the Super XL Series, is trying to change that.