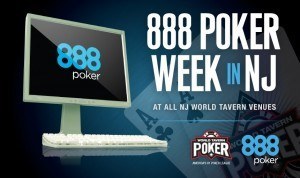 888poker in New Jersey has teamed up with World Tavern Poker in an effort to lead casual poker players online to play with real money. (Image: worldtavernpoker.com)

888poker, the second largest online poker network in the world, is traveling to New Jersey’s local bars and pubs to attract an unreached poker demographic that typically only participates face-to-face.

In a new partnership with World Tavern Poker (WTP), 888 seeks to bring the league’s substantial base of registered Garden State players to its online card rooms. Although it’s not clear how many accounts World Tavern Poker has in the New Jersey, 888 believes there is enough of a pool to make the deal worthwhile.

The agreement, which is specific to New Jersey, aims to create synergy between live and online poker play.

The challenge will be attracting a clientele that currently predominantly competes among friends at their favorite watering holes. It’s assumed a large percentage of these consumers haven’t opened an online account for poker play, even though Governor Chris Christie signed the Internet gaming bill into law in February of 2013.

If 888 can bring the leisure player aboard, the health of online poker would improve, something both the state and gaming operators desperately desire.

While the games are free to the players, the prizes are real. In 2014, 41 World Series of Poker seats were awarded at WTP tables, with over $75,000 in prizes being given to winners.

However, most of the league’s claimed 150,000 nationwide registered accounts are largely recreational poker fans who typically don’t wager with real cash.

While it remains to be seen whether this demographic will be enticed by 888’s marketing efforts to try playing online with real money, the customer base is attractive to the poker giant. Online play has been legal in New Jersey for more than a year, but has struggled to gain traction among residents.

Revenue brought in to the state through Internet gaming has fallen short of expectations, and participation rates continue to remain sluggish. Thus, targeting WTP customers makes sense, as 888 knows it’s reaching true poker fans who play on at least a somewhat regular basis.

Bringing traditional poker players online in New Jersey will be no small task, which is why 888poker has unveiled a promotional campaign to allure players to join.

World Tavern players who open an 888 real money account will be given 5,000 extra chips for any barroom tournament in New Jersey between December 15 and December 21. In addition, those who win their first game will receive a $1,500 ticket to a guaranteed online tournament.

WTP and 888’s first partnered league, “Jersey’s Real Deal,” will run two events every Friday night beginning December 12. The winner of the season will take a $3,500 VIP package to the World Tavern Poker Open next November in Las Vegas.

Last month, World Tavern Poker celebrated its 10-year anniversary in Sin City with the Open 19. The event included 10 cash tournaments, over 1,000 players, and more than $100,000 in prize pools.