888 to Launch Shared Networks; Mattingley Will Step Down 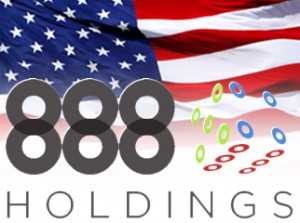 888 Holdings posted a first-half fiscal year loss in the US market, even as CEO Brian Mattingley prepares to step down. (Image: calvinayre.com)

888 announced that it will provide a shared poker network between the states of Nevada and Delaware, and that CEO Brian Mattingley will step down after three years on the job. Both bits of news broke as the company released their first-half fiscal year report, as 888 looks to spark what has ultimately amounted to a sluggish regulated market in the United States.

Back in February, Nevada and Delaware signed a pact that allows for player liquidity, or more loosely defined, an agreement to share player pools in their online poker rooms. Delaware strictly uses 888 for each of the three licensees in the state that offer online gaming. In Nevada, 888 powers the real-money WSOP site and is not just slated to launch a new Treasure Island-owned skin, but one of their own as well. The three sites in Nevada and three sites in Delaware will be linked together for a six-member online poker network which will be known as the All American Poker Network (AAPN).

For those that might think the network’s name is familiar, simply look to New Jersey where it already exists. The 888 group already runs an entity known as the All American Poker Network in a joint venture relationship with Avenue Capital. New Jersey is not part of the interstate pact, so those playing on the 888 site in the Garden State will not play with players in Nevada or Delaware.

In an investor statement, the group reported that the cost of launching the business in New Jersey resulted in a $4.4 million loss in the first half of 2014. Issues surrounding geolocation problems, persistent hassles with payment processing, and fighting unlicensed competitors were reasons why growth in New Jersey hadn’t been realized. Regardless, the firm remains fully committed to the United States market and hope the AAPN will stimulate growth in Nevada and Delaware. From a global perspective, 888poker is the second biggest poker network in the world, trailing only PokerStars.

CEO Mattingley to Step Aside

888 Holdings CEO Brian Mattingley will be stepping down from his role and moving to become the executive chairman of the board. Earlier this month, Mattingley made controversial comments when he said that he would welcome PokerStars into a regulated US market. Now, after just three years as CEO, he will no longer oversee day-to-day operations and will be replaced by current Chief Operating Officer (COO), Itai Frieberger.

Over recent years, Frieberger has led the charge to refocus 888 as a brand and worked with fellow executives on new technologies, opportunities, and improvements in user experiences. Mattingley’s insertion as executive chairman of the board means that Richard Kilsby will no longer hold that role and retire. The news comes as 888 divulged that their first-half profits have declined by 5.3 percent, which they blame on the costs for entering the US online poker market.

888 Stock Suffers as a Result

With the news that profits are down and that the entry into the US market resulted in a loss, 888’s stock value fell by 1.9 percent, which represented a further decline of approximately 25 percent for the current fiscal year. Regardless, many analysts think that 888 is in line for a rebound for the second-half of the fiscal year.