888 Bites Back at Luis Suarez: May Drop Sponsorship 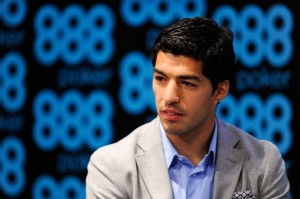 Luis Suarez, the controversial striker from Uruguay who was banned by FIFA for biting an Italian player at the World Cup, may not be smiling now. It is widely speculated that after a review, 888poker will drop the star from their endorsement program. (Image: mirror.co.uk/David Ramos)

Luis Suarez, the international football (soccer to Americans) star from Uruguay, is having his endorsement deal with 888poker reviewed in light of the scandal he’s embroiled himself in after biting an Italian defender at the World Cup. The betting firm has stated that it will not tolerate unsportsmanlike conduct, following the global firestorm Suarez is under given the video evidence from the World Cup and repeated disciplinary actions against the striker taken by FIFA. Suarez, in a statement on Thursday morning by FIFA, has been suspended nine games and faces a four-month ban.

According to 888poker’s own website, Luis Suarez is a, “football icon and one of the world’s best strikers.” It also says that his career and professional achievements are extraordinary. It’s hard to argue that point, as he has garnered awards such as the PFA Player of the Year (2014), the Premier League Golden Boot (2014), the FWA Footballer of the Year (2014) and was even Liverpool FC’s Player of the Season in 2013. He is also Uruguay’s all-time record goal scorer. Currently he is under a $75 million contract with Liverpool and ranks as one of the highest-paid players in the world.

Suarez has been under the microscope before for past transgressions. His resume, on top of all the accolades, also “boasts” a 10 game suspension for biting Chelsea’s Branislav Ivanovic and another suspension for seven games for biting PSV Eindhoven’s Otman Bakkal.

Now, FIFA has come down hardest on the superstar goal scorer, banning the player for nine international matches (ending his World Cup), and is also barred from all football activity for four months after being found guilty of biting an Italian player during a game in Brazil.

Endorsement Deal with 888 All But Gone?

Before this latest controversy, Suarez was one of the headline ambassadors for 888poker. On their site, he’s described as being a “keen poker enthusiast” and has played the game for many years. The company features the player with his own biography page, listing his professional accomplishments (minus the suspensions), as well as a gallery of pictures.

Shortly after the match when a plethora of video evidence was released to the public, clearly showing that Suarez had bitten an opponent, 888poker officials released a statement saying, “Following recent allegations made against Luis Suarez, we are reviewing our relationship with him. We will not tolerate unsporting behavior.” Twitter users have been actively urging 888poker to drop Suarez, with one clever user recognizing that 888 also sounds like “ate ate ate” and creating a hashtag around the pun.

Now that FIFA has banned the player yet again after his third incident in less than five years, it seems all but certain that he will be dropped from the 888poker Ambassador program, unless they plan a new marketing campaign to cannibals and Transylvanians.

Being suspended for Premiere League infractions is one thing, but getting suspended while the entire world is watching the World Cup is another, especially in an age where social media rules the virtual airwaves. Immediately following the incident, FIFA launched an investigation with an independent disciplinary council, who confirmed the punishment before Uruguay’s match on Saturday against Columbia.

After the match where the incident took place, Suarez incredulously tried to defend himself on Uruguayan television stating, “These situations happen on the pitch. We were both just inside the area, he struck me in the chest with his shoulder and hit me in the eye as well.”

Now that Suarez has given the sport a black eye, it might be that he can work on his keen enthusiasm for online poker, minus the lucrative sponsorship deal. It’s been an expensive year for spontaneous actions of sponsored players; earlier this month, Dale “Daleroxxu” Philip was dropped by PokerStars for what they deemed to be excessive celebration over Spain’s World Cup defeat, which cost him a lucrative sponsorship as well.

It will be a real girl next time for Boy George.