Ron McMillen had never played in an online tournament before entering the $1,000 No-Limit Hold’em Six-Max online bracelet event on Thursday afternoon. He made the most out of his online debut with a thrilling victory that earned him his biggest career tournament cash ($188,214) and a World Series of Poker bracelet. 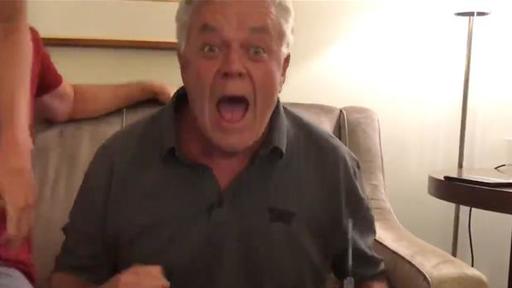 This is what it looks like when you win nearly $190,000 without ever leaving your couch. (Image: newsbreak.com)

McMillen (MacDaddy15) and runner-up finisher Ryan Torgersen (Im.Sorry) appeared to be in for a long heads-up battle as they were virtually even in chips with more than 60 big blinds apiece. But the decisive hand of the matchup came less than 15 minutes after they went heads-up as the two players got all of the chips in preflop with “MacDaddy15” holding the 10♠ 10♣ and “Im.Sorry” slightly behind with the A♦ Q♣. The 10♦ in the window quickly took the suspense out of the massive flip as Torgersen was drawing dead on the turn, and McMillen took a pot containing 92.2% of the chips in play.

Even though the game is online this summer, we still get special moments like this! pic.twitter.com/6dnGXKhMTQ

Many speculated that the online-only format of this year’s WSOP events would favor the younger generation of poker players. But the 70-year-old McMillen’s win continued a trend of old-school poker players faring well in the WSOP Online Bracelet Series. McMillen celebrated his hard-earned victory with his friends and a bottle of Dom Perignon at the ARIA.

Daniel Negreanu (DNegs) finished in 96th place on Thursday for $1,852. The cash was his fourth of the WSOP Online Poker Series so far. Negreanu’s deepest run and biggest score of the series came in the $1,000 No-Limit Hold’em Deepstack 8-Max event where he finished in 18th place for $5,849.

Other notables who cashed in Event #9 include:

Friday’s WSOP Bracelet Event, the $600 No-Limit Hold’em Monster Stack, looks like one of the best value plays of the online series at a glance. Levels last for the standard 15 minutes and players start with a stack of 40,000 chips as opposed to the 15,000 or 20,000 they usually get. But a closer look at the structure reveals that those chips could be forced into action sooner than you’d expect. 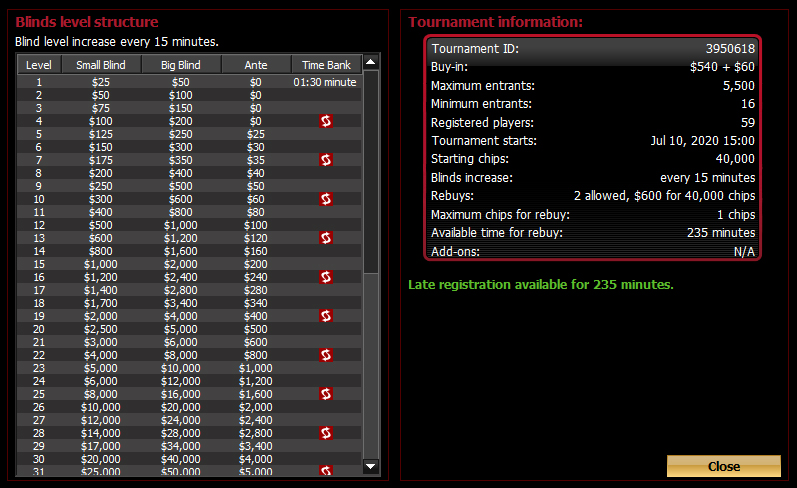 The structure for Event #9 (Image: Screenshot)