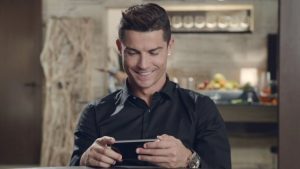 Cristiano Ronaldo is a soccer star and poker player. Does poker negatively impact his performance on the pitch? (Image: YouTube)

Poker has been blamed in the past for causing marriages to fail, insomnia, and bankruptcy. Now, the game we all love is, allegedly, the cause of soccer players stinking up the joint on the pitch.

What he found out may come as a shock to some, and not a surprise to others. The names of the athletes were not revealed, but all are professional soccer players, including some from the Premiership.

Law contends his interviewees suffered poor performance on the pitch as a result of gambling losses, mostly poker. He says players often gamble in hotels on road trips, and losses led to miserable outings on the pitch.

“Players gamble as a way of relieving the boredom on journeys to away games and after training on pre-season tours,” he said. “Contrary to popular opinion, their actions are heavily regulated and constrained, so they get easily bored.”

The theory that gambling before a soccer match is a bad idea is similar to boxer’s refraining from having sex prior to a fight. Most boxing trainers claim sex temporarily weakens the knees, leading to slow reaction time in the ring.

What the Soccer Players Say

A professional athlete must be mentally prepared for each match or game. Physical talents are worth very little in most sports if the competitor isn’t in the right frame of mind.

For example, a basketball player can have all the talent in the world, but when the game is on the line if that athlete becomes too nervous and melts down mentally under pressure, that natural ability has about as much value as a VCR in 2016.

But can gambling actually have an adverse effect on athletic performance? Law’s subjects tell an interesting story.

“I liked to bet on the bus, but it got worse when I could bet online,” one soccer player he interviewed said. “I was able to do it all the time with no one knowing. I lost a lot. My wife found out after a year or so and she got me help and it’s under control now. It’s the culture to gamble in football and it can get dangerous when it grips you.”

Graeme Law’s assertion that gambling hinders soccer performance may or may not be disputed by one of the game’s brightest stars Neymar Jr. But that doesn’t stop him, and many other athletes, from playing poker.

Neymar is a Team PokerStars SportStars ambassador and loves to play poker. He even recently Tweeted his support for the Sao Paulo Mets of the brand new Global Poker League. Ronaldo and Cristiano Ronaldo are two other soccer stars who join Neymar in representing PokerStars.