The India Poker Championship (IPC) will return on Jan. 14, 2020, and bring another wealth of added value events to an emerging gaming market. 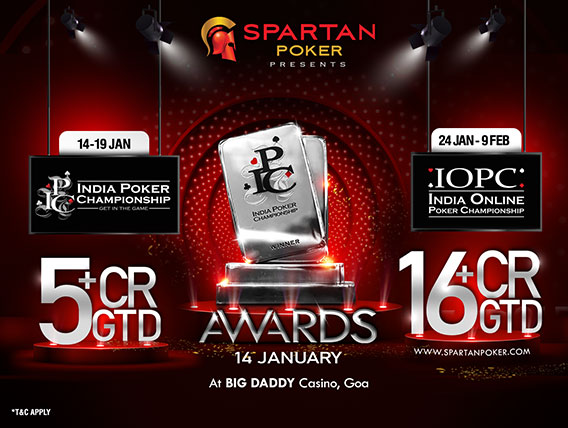 The India Poker Championship (IPC) should be bigger and better than ever in 2020. (Image: Spartan Poker)

Announced on Nov. 11 by organizer Spartan Poker, the IPC will feature five tournaments and a RS 5 crore/$700,000 guarantee.

Topping the bill will be a $450,000 guarantee main event, which gets underway onboard Goa’s floating, Big Daddy Casino on Jan. 17.

For some added excitement, the India Poker Championship will also host an awards ceremony. Taking place on Jan. 14, the event will honor some of the country’s best players and, in turn, bolster the skill game narrative India’s poker operators have been pushing for the past three years.

“We are also pleased to announce IPC Awards 2020 to honor the excellence of commendable poker players. I am sure that this initiative will help people broaden their horizons, and explore their ever-increasing interest in this mind sport,” said co-founder of Spartan Poker, Amin Rozani.

In addition to promoting the skill in poker, the IPC will be another chance to show off India’s burgeoning poker scene. As a country of more than one billion people, India has the potential to become one of the world’s biggest gaming markets.

With legal discrepancies between states hampering poker’s progress, the game’s supporters believe more positive innovations are needed. By hosting another successful IPC, Spartan Poker hopes to prove that live events can be safe, entertaining, and lucrative.

To bolster its live offering, Spartan Poker has also announced details of the India Online Poker Championship 2020 (IOPC). Set run from Jan. 24 to Feb. 9, 2020, the online series will feature dozens of events, and an overall prize pool guaranteed at more than $2 million.

Following the success of the 2019 IOPC, which awarded RS 13 crore/$1.8 million, Spartan Poker has upped the ante. In 2020, Indian online poker players will be able to fight for a total prize pool worth at least $2.2 million.

Between that and the India Poker Championship in Goa, there will be almost $3 million in tournament prizes up for grabs next year. While that may pale in comparison to guarantees in the US or Europe, India is still a fledging force in the poker industry.

With locally regulated sites operational for less than five years, the current dynamics are encouraging. With Adda52 and PokerStars India also turning up the value, it seems that prize pools are only going to increase in the coming years.

For locals, and for the poker community as a whole, the growth of events such as the IPC can only be seen as a positive.