Happy holidays, poker fans: the 2018 World Series of Poker schedule for next summer’s entire event program is live. Released on Tuesday, next year’s Series features 78 bracelet events, including the return of the uber-rich purse that pays out to the $1 Million buy-in Big One for One Drop. 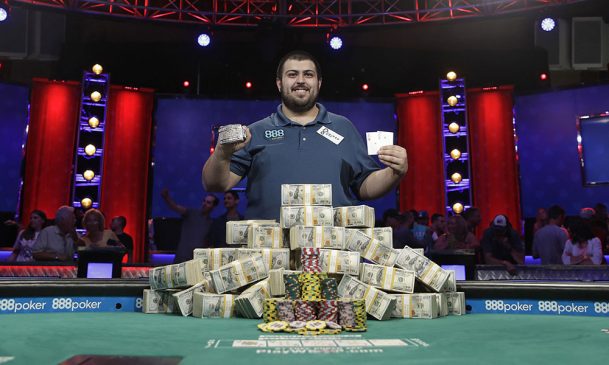 The 2017 World Series of Poker champion, Scott Blumstein, can begin his title defense on July 2, when the 2018 Main Event kicks off at the Rio in Las Vegas. (Image: John Locher/AP)

The 49th edition of the summer poker extravaganza will take place at the Rio All-Suites Hotel and Casino in Las Vegas for the 14th consecutive year, beginning May 29 and running until the conclusion of the Big One for One Drop on July 17.

Biggest of Them All Returning

For the first time since 2014, the $1 million buy-in Big One for One Drop returns to the World Series of Poker. The most expensive tournament to enter in North American poker history, this pressure-packed three-day event begins June 15, a day after the conclusion of the Main Event, and is not for the bankroll-challenged among us.

This will be the third edition of the Big One, which saw Antonio Esfandiari win in 2012 and Dan Colman take it down in 2014. Besides a hefty wad of cash, bring your A-est A game to this one.

The Magician’s $18,346,673 score remains the biggest win in tournament poker history. He defeated 48 players, including his heads-up opponent Sam Trickett, on his way to a historic victory. Colman followed that up two years later with a memorable win of his own, banking $15,306,668, and then infamously going sour-faced and refusing to do interviews after his eight-figure payday.

Who Will Be Next World Champion?

The 2018 WSOP Main Event will begin a week earlier than usual, with the three Day One starting flights running on July 2,3, and 4. A new world champion will be crowned on July 14.

Scott Blumstein is the reigning winner. The New Jersey native and 888poker ambassador won $8.15 million for outlasting a massive field of 7,221 players earlier in 2017.

ESPN and PokerGO will again partner to broadcast the Main Event. The television and streaming schedules haven’t yet been released. PokerGO is also contracted to livestream additional bracelet events. The subscription-based poker app replaced WSOP.com as the livestream home for World Series events for the first time in 2017.

It seems to be a really good 2018, but how could i get into one of those? I should starts to believe that i can do it, but then i remember that sometimes i can’t even win a freeroll and i got depressed again. Good luck for everyone, i hope someone of CC wins a tournament.