The fourth day of the 2017 World Series of Poker was a busy one. Thousands of players packed the Rio for two more flights in The Colossus, while Day 2 of the $111,111 High Roller for One Drop played out in the Brasilia Room. Toss in three bracelet wins, including one in the first online event of the summer, and the WSOP was clearly in full swing. 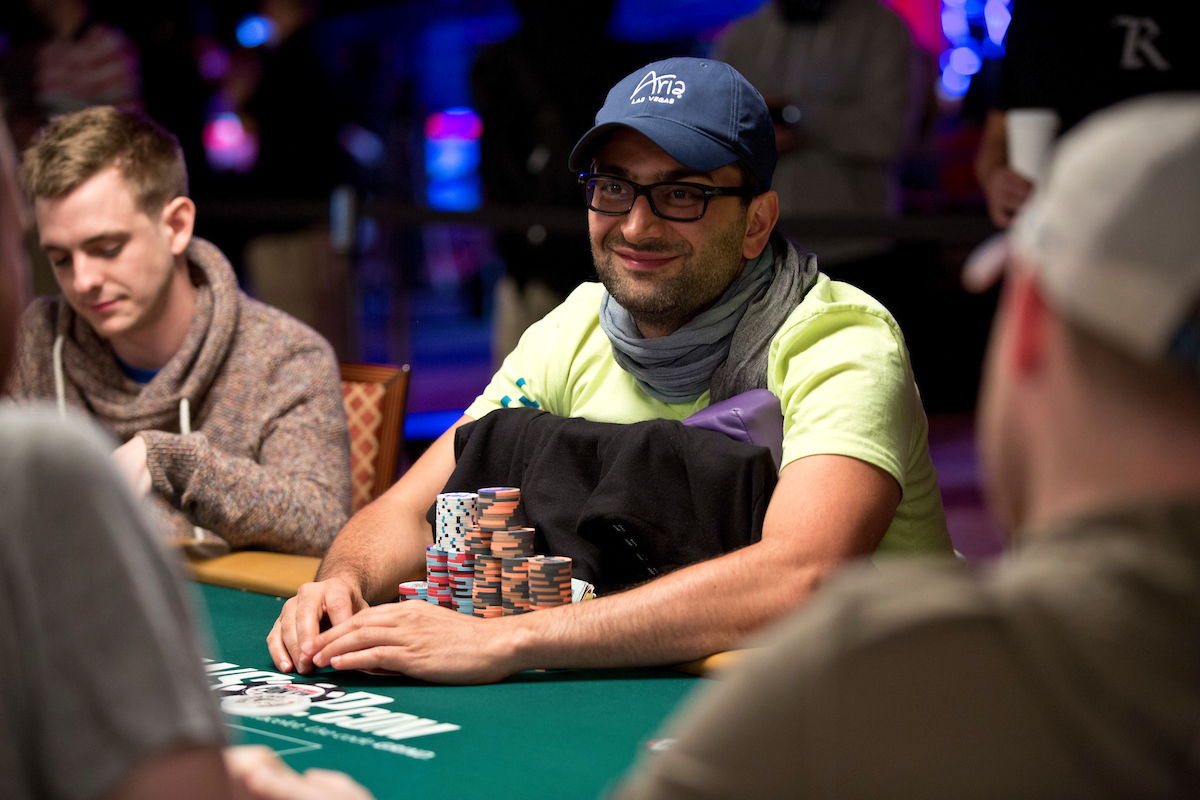 Antonio Esfandiari asks, “Are you kidding me?” The winner of the inaugural Big One for One Drop is among the 23 players remaining in the High Roller for One Drop WSOP event. (Image: Jamie Thompson/pokerphotoarchive.com)

It seemed like destiny for the Sri Lanka native and now American citizen by way of Katy, Texas, who had previously called his shot.

“I told my friends before I won my first bracelet that I was going to win two, so I don’t know if that means I’m capped now,” he joked with WSOP officials after the win.

“I was running pretty good starting three-handed, so it didn’t take too long to finish it off,” an exhausted Zamani said after the win.

In April, Zamani was crowned the World Poker Tour Season 15 Player of the Year, after notching three runner-up finishes in a ten-month span.

The other tournament to award a gold bracelet on Saturday was Event #8: $333 WSOP.com Online No-Limit Hold’em, also known as the “Little Grind.” The tournament drew 1,780 participants, which crushed the advertised $333,333 guarantee to create a $752,700 prize pool.

The first of three summer online bracelet events ended in unusual fashion when Mark “PLODonkey17” Scacewater ran into some technical difficulties on his end, forcing him to sit out much of heads-up play against Joseph “ul_gg” Mitchell. That allowed Mitchell to swipe the blinds and antes for several minutes without pushback.

When Scacewater returned, his 10 million stack had been whittled down less than 1.5 million. He’d win his first all-in for a double-up, but then fell on his next attempt to rebuild, getting it in with ace-seven, which would be bested by Mitchell’s queen-jack when a lady appeared on the turn.

The largest WSOP buy-in event of the summer, the $111,111 High Roller for One Drop, began with 130 runners, and after Day 2 action, just 23 remained, including two previous winners of the $1 million buy-in “Big One for One Drop,” held every other year.

Both Antonio Esfandiari (2012 champion) and Dan Colman (2014 winner) were among the players remaining just three eliminations away from the money bubble. Twentieth place is guaranteed to get their original buy-in back and then some, for $166,666, while the top prize pays a hefty $3,686,865.

Best positioned to make a run at it is chip leader Bertrand “ElkY” Grospellier, who is the only player over seven million in chips. Not too far behind with six million is Italy’s Dario Sammartino.

Others still in contention are Colman (4.1 million), Doug Polk (3.5 million), and Phil Hellmuth (2.87 million). Likewise, the winner of the inaugural One Drop, Esfandiari, is alive with 2.1 million. Blinds will be at 30k/60k/10k when they return.

Esfandiari was involved in one of the day’s most talked about moments.

Late in evening, Scott Seiver got his stack all-in preflop holding pocket queens, and he was in dire straits against the kings of Esfandiari. However, the board ran out in such a fashion that Seiver rivered a queen-high straight.

Day 3 will see the players play through the money bubble and down to the final table.

Saturday saw two more flights for the $565 buy-in Colossus, with Flight C and D drawing 3,102 and 2,324 entries respectively. Along with the combined 4,738 from the first two flights, the current field stands at 10,164 with two more flights to go.

Vaughn finished Flight C in 194th place, which was good for $1,294. He will return to try again on Sunday.

Aside from the final two Colossus flights, the only event kicking off on Sunday is Event #9: $10,000 Omaha Hi-Lo 8 or Better Championship. No bracelets are slated to be awarded on Sunday, but that doesn’t mean the action has stopped. On the contrary, the real excitement, as seen on Saturday, is just getting underway.