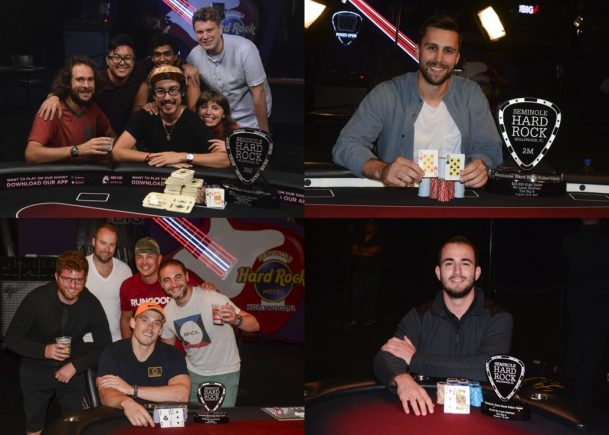 The highlight of “The Big Four” was the $5,250 SHRPO Championship tournament that drew 887 entries and surpassed the $3 million guarantee by creating a $4,301,950 prize pool. No doubt a big relief to organizers, as the SHRPO had missed several guarantees in the past, including the biggest overlay in poker history ($2.5 million) back in 2014.

It took more than 13 hours of play at the final table for Martin Kozlov to come out on top, which was good for $754,083. And it turns out his wife was instrumental in getting his mind back in the game, which should be good for some extra-nice holiday trinkets.

“Five handed I didn’t have many chips at all, and I was a bit tilted on break,” he told reporters after his win. “I was talking to my wife, and I was like, ‘What am I going to do now. There’s not much left, I’m going to have to win a couple of all ins.’ And then I came back and won every all in, and now I’ve won the tournament.”

The latest $25,500 High Roller ended up being the largest-ever in SHRPO’s four-year history with 117 entrants, which easily surpassed the $2 million guarantee by creating a $2,925,000 prize pool. With 17 players remaining, which was the money bubble, John Andress was down to less than a big blind.

He even folded jacks from the small blind after Matt Glantz raised the button with what turned out to be pocket queens. The 29-year-old Andress was hoping someone else would bubble, which they did. Amazingly, he proceeded to spin it up and wound up winning the whole thing for a career-high $801,450.

“Two orbits later, I had 800,000,” he said in his post-victory interview. “I was just happy to be at the final table. Things went pretty well.”

The defending champ, Marvin Rettenmaier, who last year spoke to CardsChat after his win, finished 14th in his title defense for $61,425.

Rounding Out the Big Four

Over in Event #12: $2,650 No-Limit Hold’em Freezeout, the only tournament in “The Big Four” not to make its guarantee, Alex Foxen finished as the last player standing in a field of 395 runners to win $204,600. Like Andress, Foxen made an impressive comeback after being down to less than two big blinds with 20 players left.

“I feel like I’m playing the best I ever have,” Foxen said. “And I hope to keep it going. I’ve been putting a lot of work into the game for a long time and that’s made a big difference in my game.”

“I’ve always loved coming down here to Seminole Hard Rock,” said Altman. “I’ve had success here in the past and the Big 4 set up in really cool. There’s electricity in the air, it’s cool to be a part of.”

Finally, while “The Big Four” was playing out inside Hard Rock Live, the one-day Event #17 $10,000 No-Limit Hold’em was held inside the tournament ballroom. That event drew 118 entries and saw Alexander Turyansky emerged victorious after 16 hours of play.