The numbers are out on the 2016 WSOP. And the “poker is dead” naysayers will be glad to know the statistics from the 47th annual summer series suggest otherwise. 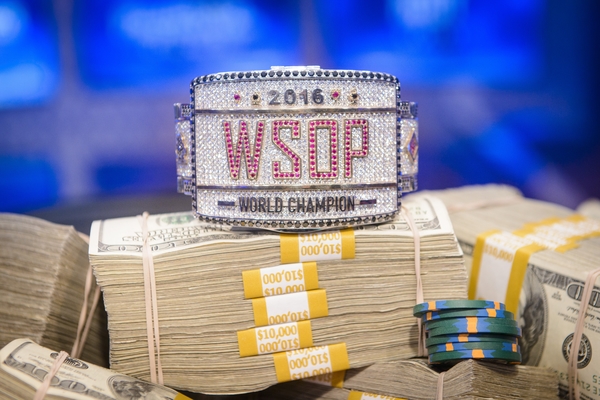 The 2016 World Series of Poker (WSOP) has wrapped up, and the final stats are more than encouraging for the future of the game. (Image: pokerphotoarchive.com)

After 69 bracelet events, this year’s World Series of Poker set a record for the most entrants ever in the history of the program. There were 107,833 entries spread among all the events, and more than $220,000,000 in total prize pool money. We should note that this includes what is yet to be awarded when the October Nine return to play out the final table on Oct. 30 at the Rio in Las Vegas.

The WSOP also set a record for total number of players paid out this year. A final tally of 15,767 poker players walked on over to the payout line at the Rio to collect their cashes. Part of the reason for an increase in the number of players cashing had to do with the tournaments paying a higher percentage of players this year. But it was also the results of more people signing up for more events than ever have in the past.

Here’s another positive stat:  the recently concluded summer poker series also broke a 47-year record with an average of 1,563 entries per tournament. Online poker’s popularity may have dropped since Black Friday in 2011, but the numbers from the 2016 WSOP suggest there is still plenty of life in the old girl yet, at least where live play and a boatload of money is concerned.

The World Series of Poker is far from just an American event, even though it takes place in the United States. When the final table airs on ESPN beginning in late October, viewers will see players from five different nations compete together. Since the poker boom began in 2003, a non-American has won the Main Event five times (Martin Jacobson, Pius Heinz, Jonathan Duhamel, Peter Eastgate, and Joe Hachem).

This summer, 107 countries were represented in Las Vegas. As expected, no country came even close to matching the United States in terms of total entries (84,027). But a couple other nations were well-represented. Canada had 4,586 entries and the United Kingdom had 4,388.

Jason Mercier was this year’s star player, if you will,  for winning two bracelets, and nearly scoring a third. But he wasn’t the only multiple bracelet winner this summer.

Benny Glaser (events 26 and 32) and Ian Johns (events 8 and 28) also conquered two WSOP tournaments. Mercier took down events 16 and 24 and also had a 2nnd place finish. He ran away with Player of the Year.

Although the 2016 WSOP was clearly a rousing success overall, there is one area with room for improvement: only 5.12 percent of the total entries were women (5,522).

Attracting more women to the game would make for an even bigger poker series. But there isn’t much else to say about this year’s WSOP from a statistics standpoint that isn’t good, better, best.

The WSOP opened its public events with the $565 buy-in Colossus II. Last year’s inaugural event attracted the largest live poker tournament field in history (22,374). This year, the tournament had a “mere” 21,613.

Event #12, the $565 Pot-Limit Omaha, broke the record for most entries in a PLO tournament. The event saw 2,483 players hit the felt. It was also the cheapest PLO event in WSOP history.

The 2016 World Series of Poker has now come to an end for the summer. And, based on the above stats, the future of the game of poker is still very, very bright.