And Then There Were Nine

When the 27 players left in the field came back to the Amazon Room at the Rio in Las Vegas on Monday, the goal was to dwindle the field down to nine. 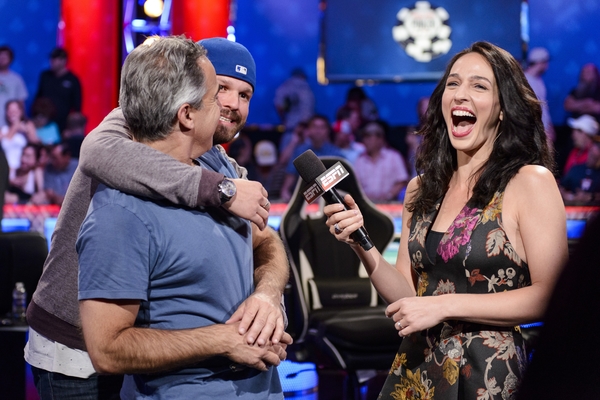 Players were dropping like flies in winter early on in the day. But then they tightened up, trying to coast to the final table. It took until after 11 pm Pacific time, the Main Event was just one bust out away from the October Nine.

At this point, the big stacks traditionally avoid confrontations with each other. True to form, most hands ended before the flop. When the unofficial final table of 10 players began, Joshua Weiss had just 3,700,000 (seven big blinds). But he refused to make a move for quite some time, hoping another player would bust, apparently. 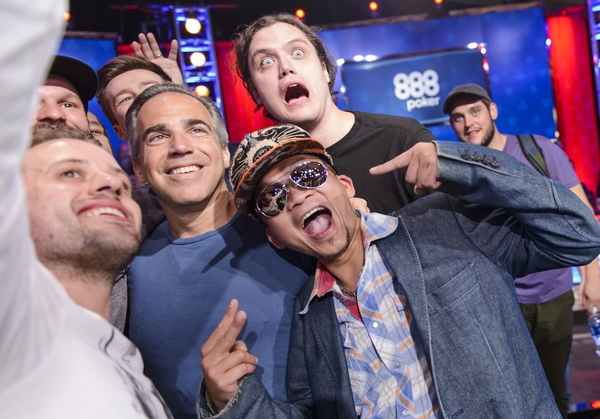 The October Nine did their own version of a selfie, as Tom Marchese photobombed off to the right. Marchese finished in the #14 spot. (Image: pokerphotoarchive.com)

The pay jump from 10th to 9th place is massive: $650,000 vs. $1 million. Weiss folded hand after hand, allowing his stack to blind down to only a couple of big blinds.

His strategy didn’t work. No other players busted before the final hand of the night. It was like watching a wounded animal slowly bleed out.

Weiss picked up A♦8♣ in early position and finally decided it was time to put his remaining 850,000 chips (less than two big blinds) into the pot. Michael Ruane and Gordon Vayo both called and checked down the hand to the river. The cards ran out J♠7♥3♥5♣4♣. Ruane flipped over J♦5♥ and scooped the pot, ending the tournament for the summer.

Along the way to the final table, there are always a few key hands that turn the tides. None more so on Monday night than one between Griffin Benger and William Kassouf.

Kassouf didn’t get any help from the community cards and exited the tournament in 17th place. The hand put Benger over 33,000,000 chips.

The Global Poker League has taken a backseat to the World Series of Poker this summer. But Griffin Benger’s presence at the final table will be great recognition for Alex Dreyfus’ new poker league.

Benger is a commentator for the league, along with Sam Grafton. He’s a talented high stakes online player who uses the moniker ‘flush_entity’.

He finished the day with 21,925,000, good for 7th place. When he heads back to the booth to cover GPL matches this fall, he’ll have some interesting stories to tell, not to mention bragging rights.

While there were was plenty of skill among the final 27, Tom Marchese is the only player whose name was likely to be familiar to fans. But his incredible run came to an end in 14th place.

Marchese won $427,930, which seems like a ton of money. But this is a guy who, in 2014, earned seven figures in three separate poker tournaments, so what’s another not-quite-half-a-million?

Last year, poker fans watching the event on ESPN were delighted to see Daniel Negreanu make a deep run. He finished 11th, just shy of the final table, but gave casual viewers a familiar name to follow. The audience this year missed out on that thrill.

On October 30, the final table will get back together to play for an $8 million first place prize and the ultimate gold bracelet. It will play until a winner is determined on November 1. In most years, the final table takes place the first Tuesday of November, but it will be a week early this year, due to the presidential election in America on November 8.

The tournament will move over to the Penn & Teller Theater inside the Rio. Norman Chad and Lon McEachern will handle the majority of the commentary on ESPN, as ever. The players you will see in October, along with their chip counts, will be as follows:

Congratulations to all players who make the final table of the big event of the world series of poker the most ptrestigioso the most dreamed in November sabremo who will become the new world champion of the World Series of Poker 2016, personally my favorites are to win the bracelet is Vojtech Ruzicka and Griffin Benger