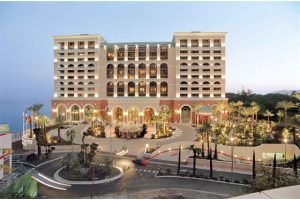 The 2016 EPT Grand Final at the Monte Carlo Bay Hotel in Monaco will be the largest ever, with 79 tournaments crammed into an 11-day period. (Images: monte-carlo.mc)

The 2016 EPT Grand Final is set to be a record breaker, thanks to a schedule packed with 79 separate events.  The European Poker Tour schedule for this year broke this week on the PokerStars website.

According to the official schedule, the EPT Grand Final will take place between April 26 and May 6 within the confines of the lavish Monte Carlo Bay Hotel & Resort in the chichi principality on the French Riviera.

As part of the tour’s continued evolution, the 2016 finale will see a variety of changes at both ends of the financial spectrum. In addition to adding another event for the well-bankrolled pro, the EPT will be reducing the price of the main event.

Although this might still be beyond the means of many, the reduced entry fee should open up the tournament to many more circuit regulars and, therefore, push the number of entrants beyond the 564 that played in 2015.

To compensate those who prefer slightly smaller fields and higher buy-ins, the organizers have added a €10,300 ($11,442) high roller to the roster. Kicking off on the second day of the festival, this eight-handed single re-entry event takes the number of official high roller tourneys at the Grand Final to four.

Naturally, cramming such as high concentration of pros into a single tournament often has some interesting consequences.

With cash games set to run throughout the 11-day festival, it’s likely we’ll get reports of some serious betting from the nosebleed regulars.

In fact, in recent years, PokerStars has gone as far as organizing special games with €1 million ($1.1 million) buy-ins for the top players, so it’s likely we’ll see more of the same this year.

Another consequence of putting so many high rollers in a single room together is prop bets. Back in 2014 at the EPT10 Grand Final, Isaac Haxton and Phil Ivey were so desperate for some action that they started betting on the number of players that would be left in the tournament at set intervals.

Already this year we’ve seen the level of prop betting hit new heights (think Antonio Esfandiari lunging around the PCA and peeing into a cup), which could mean the 2016 EPT Grand Final will not only see more tournament action, but more money changing hands for an array of potentially ridiculous and often embarrassing feats.