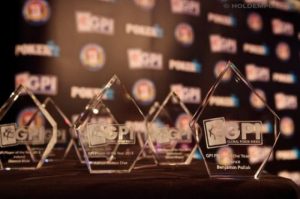 The 2015 GPI American Poker Awards will be held in Beverly Hills on February 25th. (Image: PokerNews)

The new year has begun, and that means it’s time to look ahead to the 2015 GPI American Poker Awards, the second annual show of its kind.

SLS hotel in Beverly Hills, California will host the poker world’s version of the Grammys on February 25th. A 50-panel committee will get together and decide who and what should be nominated. They have until January 20th to conclude the nomination process.

There are a total of 15 award categories, 11 of which will have nominees chosen by the committee. Each committee member selects two nominees per category. A select juror panel then chooses winners based on the committee’s recommendations.

Poker fans will have a say in one of the most prestigious awards, the Poker Ambassador of the Year. Last year, to no one’s surprise, Daniel Negreanu was chosen.

After finishing 11th in the WSOP Main Event last summer, it will be difficult for anyone else to unseat him.

A panel will select the nominees for the remaining 11 categories. The categories are as follows (along with last year’s winners of the same).

Tournament Performance of the Year: Mark Newhouse for finishing 9th two years in a row in WSOP Main Event

Charitable Initiative of the Year: “All In for Kids” Poker Tournament

Poker Innovation or Initiative of the Year: Twitch live streaming

There are two additional categories, Poker Moment of the Year and Poker Presenter of the Year, that are brand new.

Unfortunately, Las Vegas sports books won’t be taking bets on the American Poker Awards winners. But there are certain individuals and events that are considered the favorites in the most intriguing categories.

The Breakout Player of the Year will likely be a two-person race between Cate Hall and Kelly Minkin. Both are deserving and probably won’t disappoint anyone if chosen.

Tournament Performance of the Year could go to Joe McKeehen. No one dominated a final table quite like he did in the most popular tournament in the world, the WSOP Main Event.

The Event of the Year categories will likely spark some debate. The inaugural WSOP Colossus event set a record for most entrants ever in a live poker tournament. That’s a possibility for the under-$2,000 award.

The over-$2,000 award will likely be a close battle between the Aria Super High Roller Bowl and the WSOP Main Event.

It’s unclear if the awards will be streamed or broadcast at a later time.