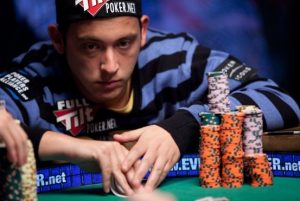 Filippo Candio, the only Italian player to make the World Series of Poker (WSOP) November Nine, has announced his decision to retire from poker.While it’s believed the almost-30-year-old – who won just over $3 million after an extraordinary run at the 2010 WSOP – had been considering quitting the game for a while, it seems that an Italian television report that claimed he was facing charges for tax evasion was the final straw for him.

“I thought my performance was going to bring me some glory and serenity,” Candio said on his Facebook page, “but today I still read on various blogs and websites that this would not be the first time I commit tax offenses. Next People’s Poker Tour’s event at the end of March, which is going to be right after my 30th birthday, is probably the last tournament I will ever play. Thank you, and goodbye.”

Candio was quick to defend himself, claiming that the report stemmed from a leading Sardinian  daily newspaper, L’Unione Sarda, which bizarrely reprinted a two-year-old news story that had exaggerated routine investigations by tax authorities into the player’s winnings into something more sinister. The story was then picked up by Italy’s private television network Canale 5.

“I am not being investigated as I am not part of the so called ‘Stealth Operation’,” Candio fumed, referring to an anti-tax fraud operation by the Italian police two years ago. “The tax board is carrying some checks on my situation, which is quite normal for a poker player. From my side, I am also trying to help them as much as I can to make my situation crystal clear. I am just tired of all these lies.”

Candio is from an upper-class Italian family and studied Classics before becoming a poker player. He arrived on the live tournament scene in Italy in 2007 and, prior to his feat at the World Series of Poker, he won the Campionato Italiano 2009, in Sanremo, for €140,000 ($194,215).

He will be remembered not for his poker prowess – which appeared questionable at the 2010 Main Event-  but more for his wild, excitable celebrations and heinous suck-outs. Candio cracked aces twice in quick succession, both times for huge pots, first against Jordan Cristos and then against Joseph Cheong. The latter hand, in which Candio managed to make a straight on the river after calling Cheong’s 3 bet all-in on the flop with 7-5 on a 5-6-6 board, has become something of a YouTube sensation and a valuable lesson on how not to play tournament poker.

Friends say Candio plans to move to Cagliari to launch a start-up incubator project. We wish him all the luck in the world – although with his propensity to crack aces, he may not need it. Candio still refers to his 2010 adventure as “the run of his life”.

How he celebrated his wins in the WSOP lol