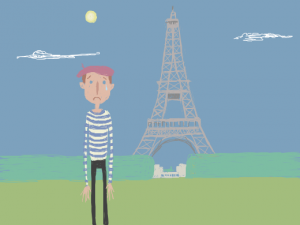 PokerStars.fr says goodbye to Austrian online players, who will be shut out of France as the country’s poker economy faces yet more misery. (Image: beyond.blogs.france24.com)

France’s PokerStars.fr took another traffic hit this week, after it was announced that Austrian players will no longer be able to access the site.

The decision to exclude Austrians from the ring-fenced French site is due to the European Union’s Value Added Tax (VAT) directive of 2015. Under the terms of the directive, operators must pay VAT at the rate set by the country where players are residents.

This means that since January 1, PokerStars has been paying a 20 percent levy (the VAT rate for Austria) on every transaction made by an Austrian player on PokerStars.fr.

While this isn’t an issue when Austrians are playing on other European platforms, it is an issue in France, thanks to the 37 percent levy on gross gaming revenues imposed by the country’s Autorité de régulation des jeux en ligne (ARJEL).

To avoid paying 20 percent VAT to the Austrian government, as well as 37 percent of its revenue to the French gaming authority, PokerStars has decided to stop Austrian players from accessing its platform in France.

The decision was communicated to players via an email, which forum user “ac3play” put up online for everyone to see. Lamenting over the fact that he could no longer take advantage of the “softest games ever,” ac3play’s email from PokerStars.fr confirmed that changes will come into effect on March 1.

As the news spread through the community, a number of players, including “BustTiarc,” echoed ac3play’s comments about soft games slowly drying up for regulars.

“Very sad day for me personally … How many f***ed up news can they come up with in such a short time??? (probably can’t blame Amaya for this one tho),” the player wrote.

Although the decision to ban Austrian players from accessing the .fr site will help alleviate a double tax hit for PokerStars, it could also reduce the number of players on the site in the coming weeks.

According to PokerScout, PokerStars.fr current has a seven-day average of 800 cash game players and a 24-hour peak of 1,533.

And traffic in France already took a hit in 2015, when PokerStars stopped UK-based players from accessing the site, due to double taxation issues. Now it looks like the current numbers will drop even further once the Austrians checkout on March 1.

The online poker economy in France is one that never seems to be far from danger. Since regulating the industry and ring-fencing local players in 2010 (French players can only play on French sites, but other nations can join the action), revenues across the board have fallen year-on-year.

According to recent reports, of the ten regulated online poker sites in France, only Winamax and PokerStars are believed to be making any money. In fact, the latest figures have shown that cash game traffic dropped 12 percent between 2014 and 2014. Moreover, the market has contracted by 33 percent in the last three years.

With liquidity sharing looking unlikely (a recent rejection in February 2016 is the cause of this), there appears to be little hope of a turnaround in the near future. And, with PokerStars now cutting its player pool further, the implications could really take their toll in the coming months.

recreational players continue to suffer as Governments try to increase revenue by taxes without realising how the games on the internet are organised and played. The end result will simply be lesser income, as less players partake of these sites where tax has become exorbitant.