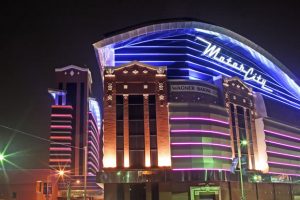 A poker dealer from Detroit’s MotorCity Casino will face a judge after a police investigation reveals a possible cheating ring. (Image: ibigroup.com)

A Motor City Casino poker dealer in Detroit, Michigan has been charged with cheating his former employer, after a police investigation found evidence that he’d allegedly paid out winnings on losing bets.

Darryl Green, 53, was a poker dealer at the Motor City in downtown Detroit until 2014. During that time, he allegedly worked with a group of six accomplices to steal thousands of dollars in poker chips.

After suspecting possible foul play in the games that Green dealt, the casino asked the Michigan State Police to carry out an investigation and, after monitoring the situation, the officers concluded that Green was in cahoots with six other players:

Luck Runs Out for Lucky Losers

The police allege that Green was paying out on losing bets to the above players, as well as not collecting chips when he was supposed to. Adding to the weight of evidence against them, police also discovered that Green conversed with the players outside of the casino before and after the alleged cheating.

Once the police had reviewed the evidence, the following charges were brought against the seven defendants:

After pressing charges against the seven individuals, five turned themselves in to the police and will now appear in court on March 1 for a preliminary examination. Two of the defendants, McKinney and Railey, are described as “habitual offenders” by the Detroit Free Press and are currently still wanted by the police.

A Culture of Bum Deals

Instances of dealers trying to cheat their employers out of money are certainly nothing new. In January 2016, Randall White, a former poker dealer from Cleveland, was charged with theft after he took chips illegally and claimed they were tips.

Similarly, a dealer from London’s Genting Casino Cromwell Mint was sacked earlier this year after security staff found him with chips in his pocket. After investigating the incident, the casino’s security team found that the dealer was taking chips off the table and was filtering them into his shoe by passing them down a tube hidden in his trouser leg.

Despite being caught, both dealers avoided prison sentences. However, reading through the list of charges against Green, it looks unlikely that he’ll be as lucky.

why the f do they keep calling this thug a poker dealer? this was a table game cheater, stop giving crazy information to draw ratings or punish poker