In most cases, losing a hand with quads is grounds for swearing off poker forever. At the Motor City Casino in Detroit on Tuesday, however, it was reason to pop open a bottle of Dom Perignon. 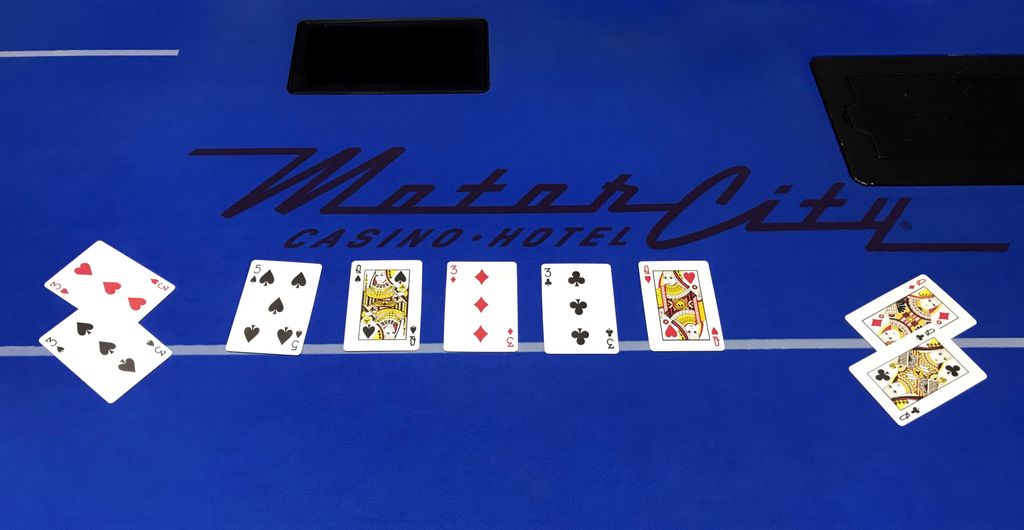 The winning hand, quads over quads, in the largest bad beat jackpot in US history at Motor City Casino in Detroit, Michigan. (Image: Twitter)

A player identified as Scott (last name unknown) took the brunt of it in a $1/$2 NLH cash game when he tabled quad 3s, only to learn a player named Kenneth was holding the nuts, quad queens.

Kenneth may have won the pot, but by holding the losing hand, Scott received the bulk of a progressive bad beat jackpot that had reached $1,068,591, making it the biggest in US history.

At Motor City Casino, the house takes an extra $1 rake per hand, which is set aside for the jackpot. Per casino rules in Texas hold’em cash games, a qualifying bad beat consists of quads over quads.

The “losing” player receives 40 percent of the jackpot, the winner takes home 20 percent, and the other players at the table each earn an even split on the remaining 40 percent.

It’s rare for any poker room’s bad beat jackpot to come even close to hitting $1 million. When the pot gets so big, card rooms tend to get busier, much like how people flock to the nearest convenience store in droves when a lottery jackpot approaches $500 million.

But after a bad beat jackpot hits, the poker room has a reserve ready in case another one hits. As of Thursday morning, the Texas hold’em quads over quads jackpot was just a shade under $500,000 at Motor City Casino.

The card room also has three additional smaller jackpots, including aces full of kings losing to any stronger hand, which would currently split $35,000 unevenly around the table.

In August of last year, a $1.2 million bad beat jackpot hit at Playground Poker Club in Montreal, Canada, in a $1/$2 Texas hold’em cash game. The hand loser turned over quad jacks only to find out he was up against a straight flush, which was good for him to receive a $460,140 payday.

In 2011, actor James Woods scooped a $125,000 share of a $488,000 bad beat jackpot at Foxwoods Casino in Connecticut when his straight flush beat quad aces. Woods said afterward the only reason he sat down at a low-stakes game was to chase the bad beat jackpot.

But not all bad beats work out well. In what could be considered a double-bad beat in July, a qualifying bad beat hit at Red Rock Casino in Las Vegas that should’ve paid $120,000. But somewhat shockingly, Station Casinos is refusing to pay, on the grounds that one player exposed his hole cards before the hand was over.

The players have complained to the Nevada Gaming Control Board, which last week delayed making a decision on the Red Rock poker room’s liability to the players.

Damn I want to be the biggest damn loser ever. Jealous 🙂