It’s rare to win back-to-back titles in tournament fields of more than 1,000 players, but it happened earlier this week at the WSOPC Bicycle Casino. Less rare is Ari Engel winning a gold ring on the WSOP Circuit. But that, too, happened at the Bike, at a final table featuring Hollywood actor James Woods no less. 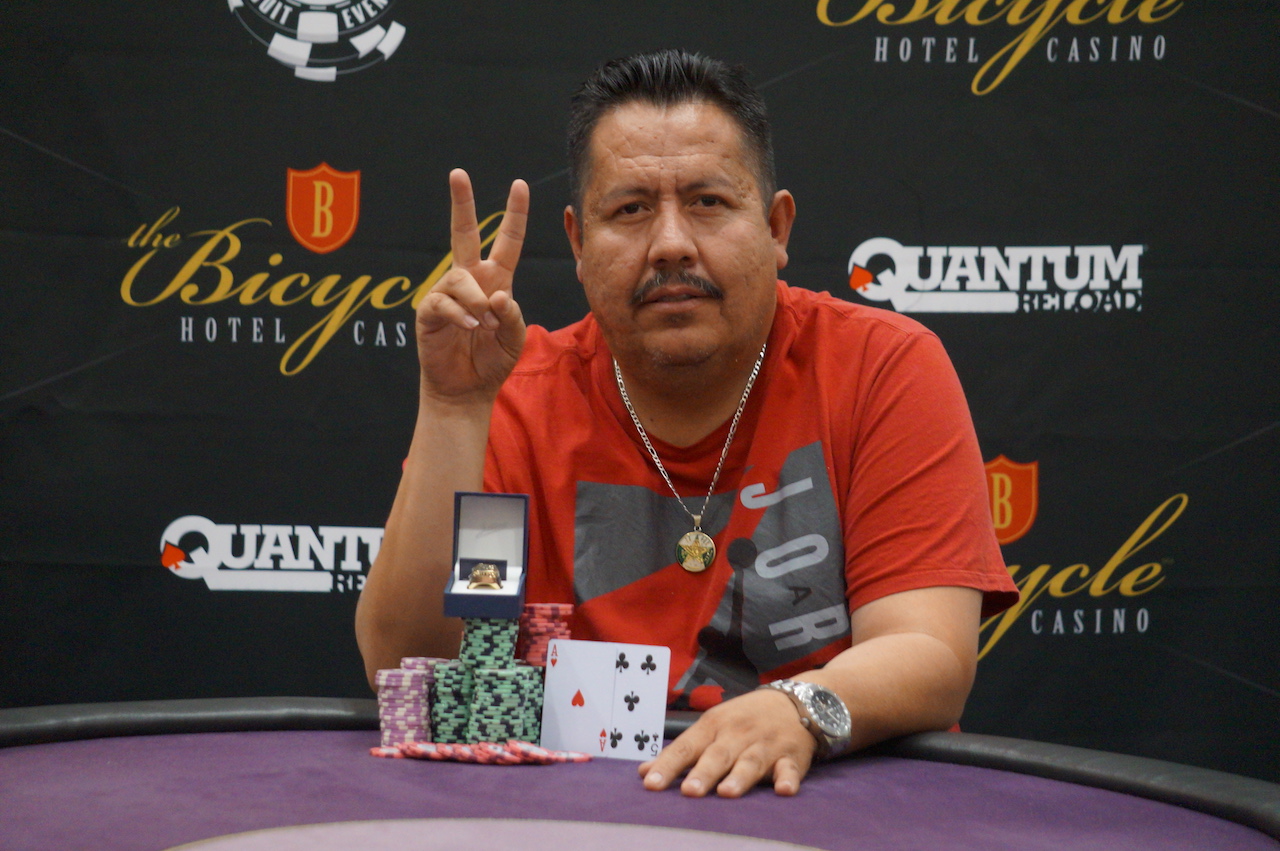 Hermilo Vargas immigrated from Mexico to California where he earned the nickname “Taxi” while coming up in poker and driving a cab. (Image: WSOP)

The World Series of Poker Circuit made two stops at the Bicycle Casino in Belle Gardens, outside of Los Angeles, for the 2017/18 season.

Belle Gardens also happens to be the home of taxi driver-turned-poker pro Hermilo Vargas, who won his first WSOP Circuit ring in December, and then successfully defended that title by winning the same event this week.

In December’s WSOPC Bicycle Casino, Vargas, nicknamed “Taxi,” navigated a field of 1,150 entries in the $365 Monster Stack to win $71,195 and his first ring. He returned this week to defend his title in a field of 1,317 entries, and amazingly he did so for an additional $86,270 and his second ring.

Vargas, who immigrated to California from Mexico, plays poker full time, and in the last four months has cashed the WSOPC Bicycle Casino four times, made three final tables, and won three of them for $159,805 in earnings.

“At the beginning, it was a very tough table,” said Vargas. “I lost a few pots and I got down. Then, I just wait for some people to kill each other and then when it’s a short table, I start to play my game.”

So how does Vargas’ latest win compare to his first?

“I think this one is better for me because I never really got short stacked,” Vargas admitted. “The other one, I was short-stacked, and I got lucky a few times. This one, I was ok the whole final table.” 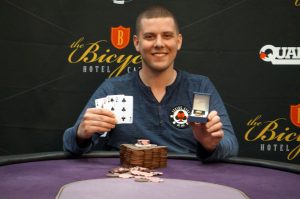 In other WSOPC Bicycle Casino news, Event #5: $365 Omaha Hi-Lo attracted 108 runners and saw 2016 Aussie Millions champ Ari Engel prevail to win $9,730 and his ninth gold ring. That puts him just one away from tying Maurice Hawkins and Valentin Vornicu, who holds the all-time record with 10 rings.

Coincidentally, Vornicu was at the Omaha Hi-Lo final table, albeit as the second-shortest stack. He wound up busting in eighth place and missed out on a record 11th ring.

Also, at the final table was Hollywood actor James Woods, star of such films as Ghosts of Mississippi and Salvador. Woods, also known for his controversial tweets, made it all the way to three-handed play before falling to Engel.

Engel then took a 3/1 chip lead into heads-up play against Don Halpern. In the final hand, Engel not only turned the nut flush, but also the nut low to scoop Halpern and send him to the rail in second place.

Others to make the money in the tournament were Phuong Tran, Henry Chow, and Olfar Arneson, who finished 10th through 12th place respectively for $675 each.

excellent performance of Hermilio Vargas, it is time that Latinos also have a good reputation in the casinos, their earnings show that not only is going through a good run, also knows how to play very well, hopefully see in the upcoming events of the world series of poker and continue proving that he is a great player and that it is not just luck, I imagine it has not been easy for him to get that high

Tremendous results. Many proffesionaly go for years to eat, but the man did it twice in a row. I wonder where he gets his motivation. I would like to hear what pushes them to come back again and again.