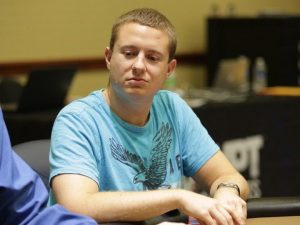 The World Series of Poker always seems to produce at least one multiple bracelet winner each year, a very vivid reminder that there is more than a little skill involved in playing this game.

This year now has its first two-time champion in Brian Hastings.

It didn’t take long for him to back that win up, as he has now also won the Ten-Game Mix competition to make it two wins in less than two weeks.

At the final table, Hastings had to deal with some very experienced mixed-game pros, including Mike Watson and Todd Brunson.

In heads up play, he dispatched Rostislav Tsodikov, ultimately winning the tournament by coming from behind to win an all-in confrontation on the final hand, a Limit Hold’em contest.

For Hastings, the win could be a great springboard into the Poker Players Championship, which begins Sunday and will use the exact same format.

“I really pride myself on being able to play all of these games well,” Hastings told WSOP.com. “I hope this carries over into the $50K.”

The $1,500 Pot Limit Omaha tournament nearly wrapped up on Friday, but two players had to return to the Rio on Saturday to determine who would win their first WSOP bracelet.

That honor went to Corrie Wunstel, who defeated Kevin Saul in a heads-up session that lasted a little more than an hour.

Saul and Wunstel went back and forth a few times in that short match, providing plenty of drama in a heads-up battle that was worth over $100,000. Wunstel won $267,435 for emerging victorious, while second place was worth $165,147 for Saul.

Wunstel avoided doing any lengthy interviews after his first career WSOP win, but did speak of a recent change in his life that he believes sparked the victory.

“I became a Christian a few months ago,” Wunstel said. “This victory is all for him and his glory. I had nothing to do with it.”

Five Battling for No Limit Crown

The $3,000 No Limit Hold’em tournament is down to its final five players, with Thiago Nishijima of Brazil holding the chip lead heading into Sunday’s final day of play. Nishijima is a professional poker player with 16 career cashes, but no previous bracelet wins.

The same story goes for the man in second place, Jesse Sylvia, who is looking to break through after 17 previous WSOP cashes.

In fact, none of the five players remaining have won a WSOP event before, meaning that the eventual winner will not only win nearly $550,000, but will also win their first WSOP bracelet.

Stephen Chidwick bagged 808,000 chips at the end of Day 2 to lead the $10,000 Seven Card Stud Hi/Lo Championship heading into what will likely be a final day of play on Sunday. Only 11 players remain in the hunt for the bracelet and a $292,158 prize.

Chidwick would be looking to win the first bracelet of his distinguished career, but others in the field are already multiple-time WSOP winners.

They include Max Pescatori, who has already won once this year and has three career bracelets, who currently sits in second place, and six-time bracelet winner Daniel Negreanu, who is in fifth.

The $1,000 Seniors No Limit Hold’em Championship played through Day 2 on Saturday, and there are now just 65 players left in the 50-and-over event.

Currently, Jim Hopperstead holds the chip lead, but it is a narrow one: many players have similar stacks near the top, and there is still plenty of time for anyone to accumulate chips at this point.

The tournament is already well into the money, with all remaining players having clinched prizes of $6,603. The champion will win $613,466.

The $1,500 Extended Play No Limit Hold’em event drew a crowd of 1,914 hopefuls on Saturday, the first of four scheduled days of play. By the end of a long session, it was Jose Pinedamoncada who narrowly held the chip lead over Philipp Roth, with both bagging over 110,000 in chips.

There are 543 players remaining in the field, including several notables. Chris Bjorin and Yevgeniy Timoshenko both have big stacks, with Darryll Fish and Blair Hinkle also holding a healthy number of chips heading in to the second day.

Bracelets should be awarded in both the $3,000 No Limit Hold’em event and the $10,000 Seven Card Stud Hi/Lo Championship, which could produce the second multiple-bracelet winner of the World Series if Max Pescatori can walk away with the title.

There will also be two more events added to the schedule on Sunday, both of which are highly anticipated in different ways.

At 10 am, we have the $1,000 Super Seniors event. One of the more interesting additions to the WSOP calendar this year, the Super Seniors is an extension of the idea behind the already popular Seniors Championship, but requires players to be at least 65 years old rather than only 50.

While that event could draw a large and very fun field, most of the eyes in the poker community will be on the $50,000 Poker Players Championship, the most revered competition in the WSOP.

Most of the world’s top players will turn out for this one, but just how many remains to be seen: the addition of Badugi and No Limit Deuce-to-Seven Lowball to what was previously an eight-game mix has led to predictions that the field size will shrink, as some pros feel that they are giving up too much in those formats to make the tournament profitable with an extraordinarily tough field.