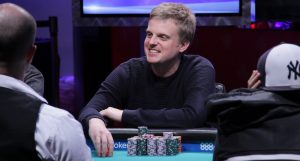 Vojtech Ruzicka is a member of the 2016 WSOP November Nine. (Image: cardplayer.com)

But Ruzicka doesn’t have to just worry about Josephy. He can make some ground on the chip leader without getting into big confrontations with him.

A few big hands against anyone at the table could make him the favorite.

Get to Know Your November Niner

What do you need to know about Vojtech Ruzicka? He’s your typical 30-year old Czech, but now he’s a millionaire. Making the WSOP Main Event final table is his biggest poker accomplishment, but this isn’t a fluke.

Ruzicka has a quiet demeanor. He pales in comparison to William Kassouf, the 17th place finisher in the Main Event. Kassouf used “speech play” to irritate his opponents, sort of like Jamie Gold did in 2006 when he won the tournament.

The 30-year old isn’t a colorful character as evidenced by his appearance on ESPN WSOP episodes. He’s an ordinary young poker player who got his start grinding online. Prior to the Main Event, he had a bit of a rough summer.

Things weren’t going his way much in the 18 WSOP events he played until final tabling the world’s most prestigious annual poker tournament.

Got His Start Online

Ruzicka’s rise to fame in poker began like so many others: online. He started playing the game while in college about eight years ago.

The poker pro made a smooth transition from math major to a game that requires math skills. It didn’t take him long to start winning online.

Once he realized he could make a nice living playing poker, he never turned back. His biggest online poker win was $710,000 for 2nd place in the 2011 World Championship of Online Poker (WCOOP) on PokerStars.

That life changing win seems miniscule compared to the amount he will win if he earns the gold bracelet on November 1. Each remaining nine players are guaranteed $1 million, but 1st place pays $8 million.

And, let’s not forget, the winner will be crowned 2016 world champion. Will that champion be Vojtech Ruzicka? Stay tuned October 30-November 1 to find out.