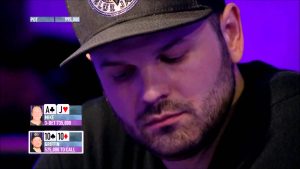 WSOP November Nine participant Griffin Benger is 7th in chips (26,175,000) heading into the final table at the Main Event. The Canadian is just one double-up away from being 2nd in chips.

The top nine players are all guaranteed at least $1 million, making this tournament win the largest of his career regardless of the final outcome. But, like the other eight remaining players, Benger has his sights set on the $8 million 1st place payout and being crowned the 2016 world champion.

Play resumes at the Rio in Las Vegas on October 30. After three players bust, the remaining six will come back the next day. Following three more eliminations, play will conclude and then resume on November 1st when a champion will be crowned. ESPN will televise the final table in its entirety on a 30-minute delay.

Benger will be among those featured at the final table. The 31-year old Toronto native just might be the most skilled player remaining in the Main Event. He’s an accomplished online pro and has shown an ability to compete at a high level in live events as well.

Prior to the Main Event, Benger was a lead commentator for the Global Poker League. He stepped down from his position in order to prepare for the final table. He will attempt to become just the second Canadian-born player to win the world’s most prestigious poker event. Jonathan Duhamel (2010) was the first and only.

If you happen to notice ‘Flush_Entity’ at an online poker table, it might be a good idea to avoid that game. That is Benger’s online identity. In 2014, he rose to the top of the online poker world rankings.

Between Full Tilt Poker and PokerStars, the November Niner has made over $5 million lifetime in internet poker games. He has something in common with one of his final table opponents.

Cliff ‘JohnnyBax’ Josephy, the chip leader, is one of the greatest online poker pros of all-time. Benger and Josephy aren’t concerned with who the better online player is right now. They’re more concerned with who will be the best live player at the final table October 30.

Benger’s claim to fame wasn’t originally poker. In 2011, he was the top ranked Counter-Strike computer game player in the world.

The Canadian has barely one-third of Josephy’s chips. But he has more than enough chips to make a run at the title if the cards fall his way.

Griffin is 100% going to win this. He has been studying hard and has the skill to do so.