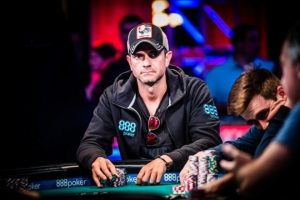 Fernando Pons is a member of the 2016 WSOP November Nine. (Image: elmundo.com)

Spaniard Fernando Pons is a member of the 2016 WSOP November Nine. He hopes to walk away from the Rio in Las Vegas on November 1 with $8 million. But, in order to accomplish that goal, Pons is going to need luck to be on his side more than anyone else at the Main Event final table.

But, then again, the odds were against the Spaniard making it this far in the first place, so who is to say he can’t overcome a massive chip deficit to win the whole thing?

Pons’ odds of making the final table were about as slim as Chris Moneymaker’s in 2003. Strangely enough, both amateurs won a cheap online satellite to get into the Main Event. Will Pons join Moneymaker as a champion of the world’s most prestigious event? Stay tuned October 31-November 1 for the answer.

Fernando Pons is, by no means, a professional poker player. Prior to the start of the Main Event, he had only won about $10,000 in live poker tournaments. He doesn’t do this for a living. He’s an account executive for a retail chain.

Pons, a married father of one, has limited live poker experience. But he has logged quite a few hours at the online tables. Although he’s a recreational player, the account executive has shown the world he has game.

Perhaps his most impressive moment during his run to the final table, Pons eliminated the great Dan Colman in 31st place. He trapped the 2014 WSOP Big One for One Drop winner, leaving Colman drawing to a three-outer on the turn. When Colman turned over his hand, he appeared to be surprised at how strong Pons’ hand was.

Pons is most certainly aware of the uphill battle he faces to win this event. BetStars, the sports betting site within PokerStars, has him listed as a 50/1 longshot to win. But the cards sometimes have a funny way of deciding the outcome, and maybe Pons will be on the receiving end of some generous flops.

In 2009, then 21-year old Joe Cada began the final table with a small stack and won the bracelet, outlasting the legendary Phil Ivey. Pons will need just as many miracle cards as Cada received that year in order to win. Regardless, the Spaniard has earned his way to the final table by playing well.