WSOP November Nine Day Two Sees Players Mix It Up, and Then There Were Three

The 2015 WSOP November Nine Day Two action was a tad different from what everyone had seen on Day One, when chip leader Joe McKeehen started off with passive play, despite having a massive chip lead. On Sunday, Neil Blumenfield stole the show for much of the day, while Max Steinberg, Tom Cannuli, and Josh Beckley played tighter than their reputations. 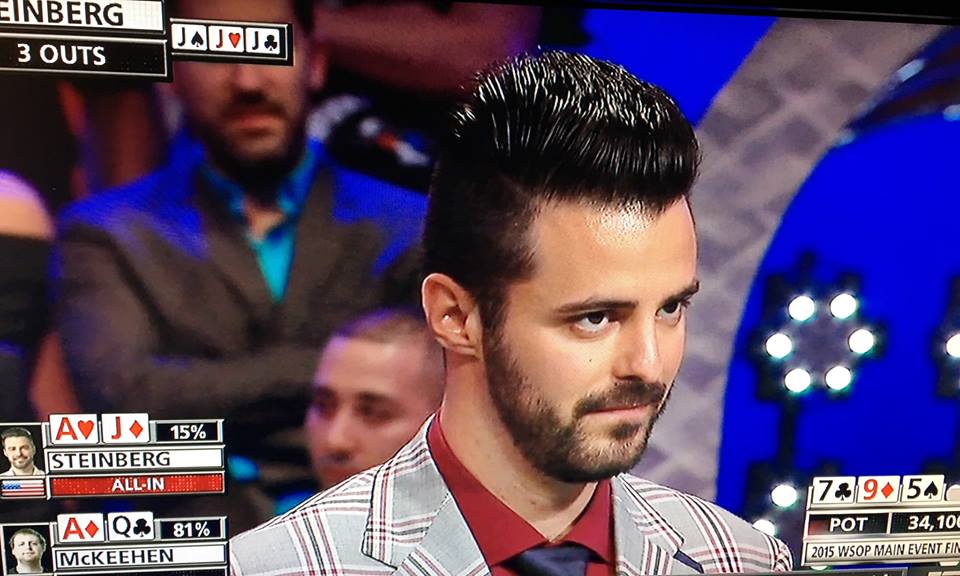 Max Steinberg hoped for a little magic on his final hand, but none appeared, and he busted fourth. (Image: ESPN WSOP broadcast)

On Day Two on Monday night, there were yet more surprises in store for viewers. Blumenfield didn’t live up to the “legend” moniker with which Antonio Esfandiari had dubbed him on Day One. Beckley showed more aggression, and McKeehen continued to add to his chip lead.

By the time play concluded on Monday’s ESPN broadcast after about 3 ½ hours, the November Nine had whittled down to the final three players.

Steinberg was a popular pick to win the tournament, but after losing nearly half his Day Two starting stack, he ran into some tough luck when his all in shove with A♥J♦ was called by McKeehen’s A♦Q♣.

Desperate to catch a break, Steinberg didn’t improve and was thus unable to keep his tournament hopes alive. McKeehen took down the pot, increased his chip stack to better than 128,000,000, and sent Steinberg to the rail in a disappointing 4th place.

Where Did You Go, Neil Blumenfield?

On Day One of the final table, Neil Blumenfield, a 61-year old amateur from San Francisco, showed no fear. He three-bet on numerous occasions, sometimes without having the goods.

Day Two was a different story. Blumenfield seemed like an entirely different player. He three-bet Steinberg off a superior hand early on in the session, but didn’t attempt many aggressive plays after that.

Blumenfield survived the day, and actually increased his chip stack. But that was due to picking up premium hands at the right time.

He was more patient on this day than the previous evening. At times, he appeared antsy to enter a pot, but couldn’t quite pull the trigger on one of his patented three-bets.

Blumenfield finds himself in a huge hole with 40,125,000 chips, nearly 90,000,000 fewer than the chip leader McKeehen . But he’s still in it and, who knows, maybe the Legend will resurface once more come Tuesday night.

Josh Beckley was the forgotten man at the table Sunday night. He had only entered a few pots throughout the five-and-a-half hour session.

On Monday night, viewers got to see a different side of the 24-year-old. In a blind-versus-blind situation, Zvi Stern shoved all in with a suited 10-9. Beckley woke up with Rockets and doubled up to 29,700,000.

It was that hand which changed everything for him. The instant he picked up some chips, he started making moves.

Beckley seemed relentless out there. He went from smallest stack to second in chips in a short period. He finished the day in third place with 23,700,000.

Joe McKeehen, Neil Blumenfield, and Josh Beckley will duke it out live Tuesday night at 6 pm in Las Vegas for a 6:30 PM Pacific Time 30-minute delay broadcast on ESPN. The last man standing will receive $7.6 million, the gold bracelet, and all the poker glory and tax headaches that go with it.

will be watching tonite. Do think Josh will repeat? my money is on Neil Blumenfield.