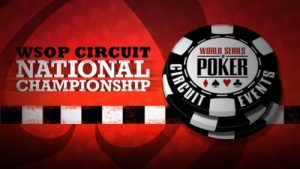 As the saying goes, there’s no place like home. And for the World Series of Poker (WSOP), what could be better than wrapping up an eventful tournament season in a place that feels just like home?

As the tenth season of the WSOP Circuit comes to a close, WSOP.com has revealed that the National Championship event will convene at the new WSOP-branded poker room at Bally’s Atlantic City.

A number of land-based stops in North Carolina, Iowa, Philadelphia, Colorado and New Orleans still remain en route to the finale. Ten players have yet to be added through automatic qualification spots (out of a total of 44 entries). An additional 50 players can earn a spot by accruing the most points on the WSOP Circuit tour. That 22-stop tour began last year in August in Connecticut and will wrap up at the Harrah’s New Orleans stop from May 8-19.

Seats Up for Grabs

Six seats remain to bring the number of qualifiers to a total of 100 players and WSOP has now revealed how those seats will be awarded. In May, the WSOP.com online rooms in Nevada and New Jersey will host an online freeroll tournament. The winner of each tournament will automatically qualify for a National Championship seat. Players can enter the freeroll by making a deposit during the month of April where they will then be awarded a ticket. The Nevada freeroll takes place on May 10, with the New Jersey one scheduled for May 17.

Mirrored knockout tournaments will also be hosted by WSOP.com in Nevada and New Jersey from April 20 to May 3. The “Knockout Series” has players entering any of the 14 consecutive nightly tournaments. The 14 winners will then be freerolled into a 14-person Knockout Series Champions Freeroll on May 4, where the winner of each state will win a National Championship seat.

The final two qualifying seats will be awarded to winners of live tournaments at Bally’s Atlantic City. The first event is a live tournament freeroll on Monday, May 19, with the winner automatically earning a seat. On Tuesday, May 20, a $1,125 “last-chance” structured No-Limit Hold’em tournament will see the winner take home part of the prize pool, but also the final National Championship seat.

Best of the Best

So far, the 100 players at the top of the WSOP World Rankings can buy in to the event for $10,000. Their eligibility is a result of their performance across all WSOP gold bracelet events over the past two years. Their $10,000 buy-ins will be directly added to the prize pool rake-free. The final number of entries will be around 100-200 players, with a prize pool between $1-2 million.

“We look forward to welcoming the best poker players in the world to Atlantic City and our brand new poker room at Bally’s”, said Kevin Ortzman, general manager of Bally’s, in a press release. “We are dedicated to making our new room the best in New Jersey, and are excited for players to see all the great things happening in Atlantic City with the convergence of online and land-based gaming.”