WSOP Makes Changes for 2016 in Hopes of Improving Player Experience 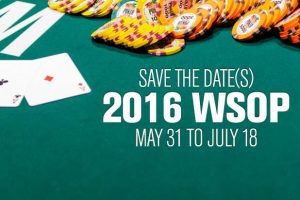 The 2016 WSOP is coming soon, and some cool improvements have been made to the world’s most popular poker series. (Image: WSOP.com)

The 2016 WSOP is only a month away and the most popular poker series in the world is hoping its recently announced changes will satisfy its players. The enhancements range from a better payout system to more guaranteed money during the series on WSOP.com.

Each year, those at the World Series of Poker field thousands of comments, complaints, and questions from players. It’s virtually impossible to make everyone happy but the Caesars Entertainment-owned organization makes annual tweaks to improve.

This year, the biggest improvement has to do with payouts. A brand new eQueue Payout Process will make it a bit less frustrating for a player to get paid in some tournaments.

The eQueue Payout Process is a response to the many angry Colossus money finishers in 2015 who had to wait hours, if not days, to get paid. A problem arose last year when dozens of players at the same time and more than 1,000 in the same night cashed in one event.

The Colossus attracted more than 22,000 players, a live tournament world record. That made for long waits to get paid, as should have been expected.

In response, the eQueue Payout Process was formed. Players can now join a wait list and will receive a text message once their payout is ready. The benefit of this new system is players won’t have to stand in a long line for some of the larger tournaments such as Colossus II.

WSOP.com does exceptionally well during the World Series of Poker. The poker site offers daily satellites into live WSOP events, daily tournaments, and the second annual online bracelet even which takes place June 8.

Starting May 25, and running until July 10, WSOP.com will have over 500 tournaments with more than $2 million in prize pool money up for grabs.

But, wait, there’s more! David Tuchman, one of the top broadcasters in poker, will continue his role as the lead live stream announcer during the WSOP. This year, on WSOP’s website, a new daily recap of the previous day’s final tables will be aired.

Tuchman will again be joined by co-broadcaster Tatjana Pasalic in the booth. Live streaming begins on June 3.

Kevin “Kevmath” Mathers, a poker information mogul and social media giant, will take over the reigns of the WSOP and WSOP.com Twitter accounts during the series. Mathers brings a wealth of poker knowledge and is always quick to respond when someone has an important question on Twitter.

The enhancements to 2016 won’t go over well with everyone because there are always complainers in every crowd. But the majority of the poker players will be satisfied.