The 2016 World Series of Poker (WSOP) Main Event final table kicked off from the Rio in Las Vegas on Sunday evening. Nine players, dubbed the “November Nine,” took a shot at the $8 million 1st place. Now, with two days remaining, there are six left. 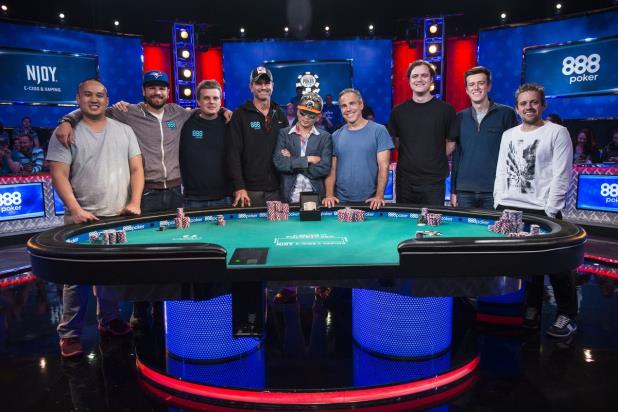 If you were hoping for some fireworks, you got what you wanted on the first hand. The two chip leaders, Cliff Josephy and Qui Nguyen, traded pre-flop raises on marginal hands, with Nguyen taking down the pot following a four-bet.

That wasn’t a sign of things to come, however. Play slowed down. It was rare for a player to get out of line. The main strategy for most of the night was what some may refer to as “ABC poker.”

Fernando Pons, a 37-year old Spaniard, began the day with just over 10 big blinds and didn’t last long. Needing a double-up, he shoved all-in with A♦6♣. Josephy, the chip leader, picked up K♥J♣ in the big blind. Although his hand wasn’t very strong, anything decent was good enough against the small stack.

Josephy flopped a king and it held up. He scooped a 10,450,000 chip pot and sent Pons to the rail in 9th place  for his guaranteed $1 million payday.

Jerry Wong then became the short stack. In the big blind, he picked up the perfect hand to double-up with pocket jacks. Well, at least he thought so. Unluckily, Wong ran into Vojtech Ruzicka’s pocket queens. All the money got in before the flop. Wong got no help from the board and went home in 8th place for $1,100,076.

That left Global Poker League announcer Griffin Benger as the lone remaining short stack. Since Will Kassouf wasn’t at the table, Benger didn’t get into any verbal altercations.

The poker analyst went nearly 60 hands before winning a (small) pot. After waiting patiently for any hand with double-up potential, he put all his chips in the middle with A♠9♠. Gordon Vayo made the quick call with 10♠10♥. Benger, a former top-ranked online poker player, got no help on the board and busted out in 7th place for $1,250,190.

Although Kassouf wasn’t at the final table (he’d busted in 17th place), ESPN announcers debated his behavior during previous Main Event episodes. During a break, Daniel Negreanu and Phil Hellmuth both agreed his “speech play” strategy was fine, but felt his tanking was bad for the game.

There wasn’t any speech play at the final table, and the players didn’t spend much time tanking. Discussions between the players were, in fact, at a minimum.

Some poker pros watching on television didn’t appear to be too impressed with that play. Brian Hastings was critical of Czech player Vojtech Ruzicka on a hand early in the evening.

“That snap checkback by Ruzicka with JJ on T438Q on river was hard to watch. Everyone is playing so scared,” Hastings posted on Twitter.

Hastings, himself a three-time bracelet winner, did say he was impressed with Ruzicka’s play overall. He said the same about Michael Ruane.

Cliff ‘JohnnyBax’ Josephy began with 74,600,000 chips: the best at the table. But he was quiet the first few hours. After getting four-bet by Nguyen on the first hand, he didn’t get out of line much. Nguyen quickly overtook Josephy for the chip lead, and Ruzicka spent some time at the top as well. Josephy even fell back to 3rd place at times.

But as the oldest player at the table (50), and the only former bracelet winner (two-time), it was only a matter of time before Josephy stepped up his aggression. He got Nguyen to fold the best hand a few times in heads-up situations.

As play approached its conclusion for the evening, Josephy began to assert himself as the table bully, And, arguably, the favorite.

Going Out with a Bang

Five players will come back to the Penn and Teller Theater at the Rio on Monday night. They are as follows (in order of chipstack size):

Cards will be in the air once again on Monday at 4:30 pm PST, with television coverage to begin on ESPN2 at 5. The tournament will play down to three players tonight, and then conclude on Tuesday evening.

you have the placements wrong, saying 6th and 5th instead of 7th and 6th

Thanks! That’s been fixed. 🙂