PokerStars has released the betting lines for the World Series of Poker Main Event final table which begins October 30 at the Rio in Las Vegas. The nine remaining players are all vying for the $8 million first place prize and the coveted gold bracelet, along with being crowned 2016 world champion. 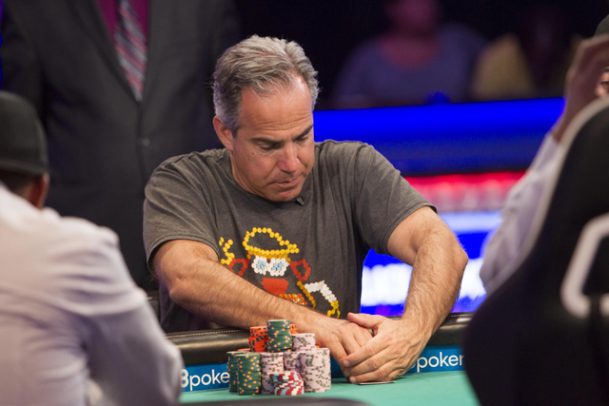 Cliff “JohnnyBax” Josephy is the favorite to win the 2016 WSOP Main Event, according to PokerStars.  (Image: Richard Brian/reviewjournal.com)

It shouldn’t come to anyone’s surprise that Cliff ‘JohnnyBax’ Josephy is the overwhelming favorite (7/4). After all, he’s the chip leader heading into the final table and is the most experienced player. The 51-year old is the lone former bracelet winner remaining.

Josephy is an old school poker pro. And as well as he’s performed in live poker tournaments, ‘JohnnyBax’ is more known for his online prowess.

But as most realize, chip lead and experience means nothing in poker if the cards don’t cooperate. Josephy is likely to have the largest cheering section at the Rio.

But he isn’t the only poker player at the table with talent. Gordon Vayo (9/2 odds), a San Francisco resident, is the second most likely to win, according to the odds makers at BetStars, PokerStars’ sports betting site.

Vayo, like all November Niners, is guaranteed at least $1 million. Since securing that large paycheck in July, he took first place in the $2,500 buy-in River Series Main Event in Oklahoma for $587,120. He’ll sit down at the final table with 49,375,000, the third largest stack. Throughout his career, the 27-year old has amassed $2.5 million in live tournament winnings. He cashed in eight of 21 bracelet events this summer.

Kenny Hallaert has the fourth-largest stack (43,325,000), but is considered the third most likely to win. For the second straight year, a Belgian will be at the final table. Last year, Pierre Neuville finished in the #7 spot. Hallaert is 5/1 to win. His best claim to fame prior to this year’s Main Event was a fifth-place finish in the inaugural WSOP Colossus in 2015.

Qui Nguyen checks in at 11/2 odds. Only Josephy has a larger stack (67,925,000). Despite his large chip stack, the 39-year old Las Vegas resident isn’t getting much love from the sports books, due to his lack of tournament experience.

Griffin Benger (26,175,000) left his position as a lead commentator for the Global Poker League to focus on preparing for the Main Event. The announcer has impressive online skills, hoping to win his first WSOP bracelet. He checks in at 15/2 odds.

At 9/1 odds, Vojtech Ruzicka (27,300,000) from the Czech Republic is hoping to become just the second gold bracelet winner from his home country. Martin Staszko finished runner-up in the Main Event in 2011, but that’s as close as Czechoslovakian has come to winning poker’s most prestigious tournament.