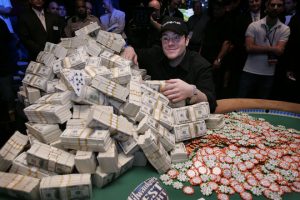 Gold came out of nowhere in 2006 when he took down the World Series of Poker Main Event in memorable fashion. He brought home $12 million, the most any Main Event champ has ever received. That was also the largest Main Event field in history, and still is.

The signing of the 2006 poker champ by WPFH comes on the heels of another former poker star receiving a contract for a similar position at the Venetian poker room in Las Vegas. Annette Obrestad was dubbed poker room ambassador earlier in the week, stirring some controversy in the process.

Like Gold, Obrestad made a name for herself some years back, but hasn’t accomplished anything significant in the poker world in recent years. WPFH won’t receive nearly the amount of criticism for hiring Gold as the Venetian did when it hired Obrestad, because anti-online champion Sheldon Adelson isn’t affiliated with WPFH, while the Venetian is one of his Las Vegas Sands kingpin properties.

Gold’s specific role at WPFH is unclear at this time. But he did give a general description of what he will be doing. According to the former champ, he will be involved with “seeking strategic partners, the development of various cash and social gaming platforms, along with showcasing … technologies and TV productions through traditional and online channels.”

World Poker Fund Holdings Inc. is a gaming development and media company. The organization says in its press materials that it is involved with creating two poker reality series and developing an online poker platform for California should the state eventually legalize the game, among other projects. Ironically, Gold is the first actual poker player that WPF has drafted to promote its products, although non-player high-profile poker industry figures are already involved with the company.

WPFH will bank on Jamie Gold’s name recognition around the poker community for branding purposes. Gold has a recognizable face and name in poker, especially among poker players that were around during the poker boom era.

The 2006 WSOP was one of the most memorable poker tournaments ever. Not only did it set the record for Main Event participants (8,773) and prize pool ($82,512,162), but Gold’s brash, some would even say abrasive, table blather will never be forgotten by many poker fans.

He was vocal throughout the tournament, often berating his opponents by showing a bluff.

Many professional poker players didn’t care for his style of play during the 2006 Main Event. Gold’s aggressive conversational style, in what could even be called a baiting manner by some, played a role in the World Series Of Poker enacting a new rule that limits table talk while a player is in a hand.

The Main Event champ had to defeat a difficult final table that year, including one of the top players in the game at the time, Allen Cunningham, who ultimately took 4th place. Paul Wasicka, another talented pro, was the runner-up.

Hiring a poker champ as an ambassador should help WPFH build its brand, even if that champ is not universally adored by the poker community.