Four new millionaires were eliminated on Sunday, the first of three sessions at the 2019 WSOP Main Event final table. That leaves just five individuals who still have a shot at the $10 million first place prize and the distinctive title of poker world champion. The action begins at 7 pm PT on ESPN Monday night. Stick around right here for some fun commentary throughout the evening with a running WSOP live blog. 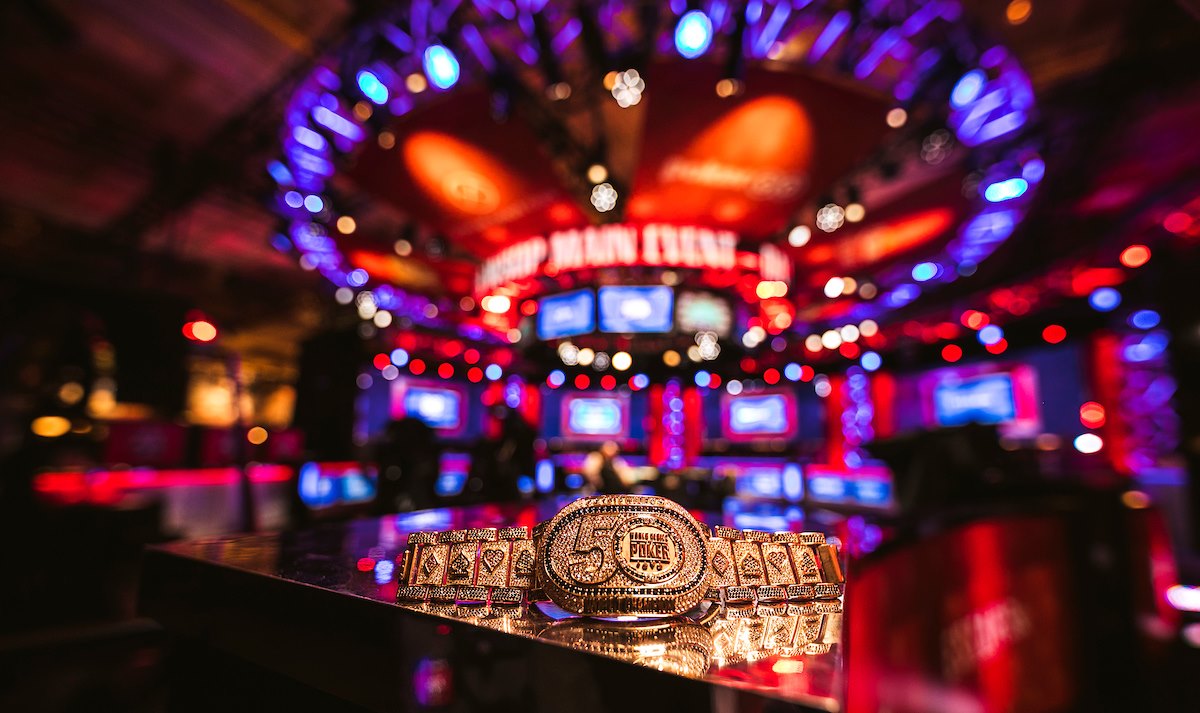 Which of the five remaining players will take home this beautiful piece of jewelry? (Image: wsop.com)

There are some interesting story lines to follow tonight. First off, will Kevin Maahs play faster? He was the talk of Poker Twitter throughout last night’s broadcast, and for all the wrong reasons. Maahs constantly tanked in obvious fold situations and drove viewers crazy due to his odd obsession with asking opponents for their stack size.

If Maahs continues that behavior tonight, expect more angry comments on social media. And possibly some fans turning off the stream or TV. Garry Gates, who is second in chips, remains the crowd favorite. Chip leader Hossein Ensan has been a joy to watch, especially for those who appreciate solid big stack poker play.

Each of the remaining five players are guaranteed at least $2.2 million. The winner, which will be crowned on Tuesday, will take home $10 million. So, the pressure will be on tonight and tomorrow as the pay jumps now become insanely massive.

It took three hours before we saw a first elimination today. And, likewise, only a half hour for two players to bust after that. The next and final elimination of the day was fan favorite Garry Gates who went out in fourth place for $3 million.

Gates shoved his 29 million stack into the middle with pocket sixes but was unfortunate to run into the pocket queens of Alex Livingston. Gates got no help from the board and Livingston won the pot. Gates’ impressive and humble run came to an end just short of the title.

With that, we put a wrap on the second day of the 2019 WSOP Main Event final table.

We’ll crown a poker world champion and $10 million winner tomorrow night. Play resumes at 6 pm PT on Tuesday and the coverage can be seen on ESPN.

Well, we can all stop complaining about Kevin Maahs’ habitual and annoying tanking, folks. He’s finally out after losing a race against Hossein Ensan. Maas earns $2.2 million for fourth place. We now have one more elimination to go before wrapping up this session.

Ensan increased his chip lead and now has 304 million chips, around 60 percent of all chips in play.

For the first time this tournament, someone other than Garry Gates or Hossein Ensan has reached the 100 million-chip mark. Alex Livingston, after winning a big pot against Gates, is now at 110 million. Gates, on the other hand, has bled from 160 million to 38 million in just two hours. It’s been a rough day for the fan favorite and poker media veteran.

It’s sad that Kevin Maahs’ habitual tanking is the top story at this final table. But ESPN commentator Jamie Kerstetter brought up a good point about installing a 30-second shot clock to prevent tanking. She argued it wouldn’t help combat the action of a player like Maahs because he already takes about 30 seconds to act. That’s true. There really is no way to stop a frustrating player like Maahs from destroying the game of poker. We just have to accept it, I suppose.

I hate to continue complaining about Kevin Maahs, but it’s hard. I’ve never seen a more annoying poker player with the possible exception of Will Kassouf. His constant tanking for no reason whatsoever is such a detriment to the game of poker. I just cannot root for this guy and the fact that he’s going to win millions of dollars might actually be proof that karma isn’t real.

Hossein Ensan has dropped about 1/6 of his stack over the past hour but still has a massive chip lead with 233 million chips. But the rest of the players are all lumped together with Dario Sammartino having the smallest stack (57 million) and Alex Livingston still with the second largest stack (79 million).

During the break, the Poker Hall of Fame class of 2019 were announced. David Oppenheim and Chris Moneymaker are the two members this year. I’m not surprised on Oppenheim but shocked Moneymaker finally got in, and quite relieved. No doubt in my mind Chris is deserving given he’s arguably the most important figure in poker history.

And with that, we move onto our first break of the evening. Hossein Ensan, who is clearly the best player at the table, still holds a massive chip lead. Alex Livingston has replaced Garry Gates as the second biggest stack. We’ll see you in 20 minutes.

(8:55 pm PT) – What Confuses Me Most About Maahs’ Incessant Tanking

So, here’s what truly confuses me about Maahs and his habitual tanking. If you’re going to tank with weak hands frequently, why not occasionally mix in a bluff raise? He never does. When he has a weak hand, he folds. But for some odd reason, he continually tanks. His style of play is just confusing, and annoying.

I was just looking over Poker Twitter to see if I could get a pulse from the fans. I have to say, the excitement level towards the players at the table seems to be less than in year’s past. I don’t get the impression the viewers are all that enthusiastic about the product on the TV. And, to be quite honest, I’m not surprised.

A thought just popped into my head which is not always a good thing. Anyway, we’re now about six hours of play into the Main Event final table and I just realized we haven’t yet seen any sick bad beats. Come on dealer, let’s cooler someone ASAP (preferably Maahs?).

I agree. I don’t want to be disrespectful to other commentators but Nick is next level.

It’s hard to base your opinion of a player’s talent on a small sample size. But through one day and an hour of play at the final table, I have to say that Garry Gates has been a tad disappointing. It’s not that he is playing terrible. It’s just that I have yet to see him make an impressive mixed in with a couple of questionable folds. He’s a fan favorite and seems like the type of player you want to root for, so I’m hopeful we’ll see him pick it up a bit and show some big bluffs.

FYI, Gates is down to 94.8 million chips, well below the stack he started the day with. Even worse, he’s dropped 70 million chips in the past 12 hands. Yikes.

Maahs just tank-folded J-4 off-suit pre-flop and while he was pondering the decision he had already decided he was going to make, the other players at the table gave him a hard time for taking so long. Good for them.

Look, I get it that Kevin Maahs claims he always plays slow. But this is the WSOP Main Event final table. Millions of people could be watching this at any given time. But when you have a player such as Maahs who is taking so much time to act, many of those viewers will, understandably, tune out. Pick up the pace, Kevin. You’re doing a disservice to the game of poker.

During the poker boom era, the play was almost always fast. We had very few tankers wasting everyone’s time. If we ever want to see another poker boom, we just can’t have players like Maahs at the WSOP Main Event final table.

I can’t tell you all how impressed I am with the quality of Hossein Ensan’s play at the final table. Dude is just straight up putting on a big stack poker clinic. He’s showing no fear even up against the other big stack, Garry Gates.

With 9-4 on a Q-3-4-J board and 26 million in the pot, Ensan led out under-the-gun for 21 million, which got Gates to fold his pocket fives. This man has no fear out there.

I wasn’t all that impressed with the quality of play last night on the first day of the final table. Don’t get me wrong, it’s not like they all played like fish. But we watched mostly ABC Poker. That hasn’t been the case early on today and it’s quite refreshing. We’re seeing some loose three-bet action and aggressive post-flop action.

Alex Livingston mysteriously folded pocket queens pre-flop to a three-bet last night. So, he gave off a bit of a tight image. But he’s changing it up early on today, three-betting J-10 and raising pre-flop with a suited 5-4. Let’s see if he keeps up the aggression after the other players get word from their rails that he’s raising light.

Well, that didn’t take long. Dario Sammartino won a race against chip leader Hossein Ensan and earned a full double-up to 45 million and now the short stack is back in the ballgame.

Side note: you have to love Sammartino’s rowdy rail. This is what the WSOP Main Event final table is all about. I have no idea what they’re even chanting – they’re speaking and singing in Italian – but I love it.

Cards are about to be in the air. The first thing I’ll be watching for is just how tight small stacks are early on. There’s an $800,000 pay jump from fifth to fourth place.

I have to wait for Kevin to be eliminated before I can watch this.Its like watching paint dry with Kevin and his snail pace.

Just heard Kevin was knocked.I can pause my movie and put the final table on.