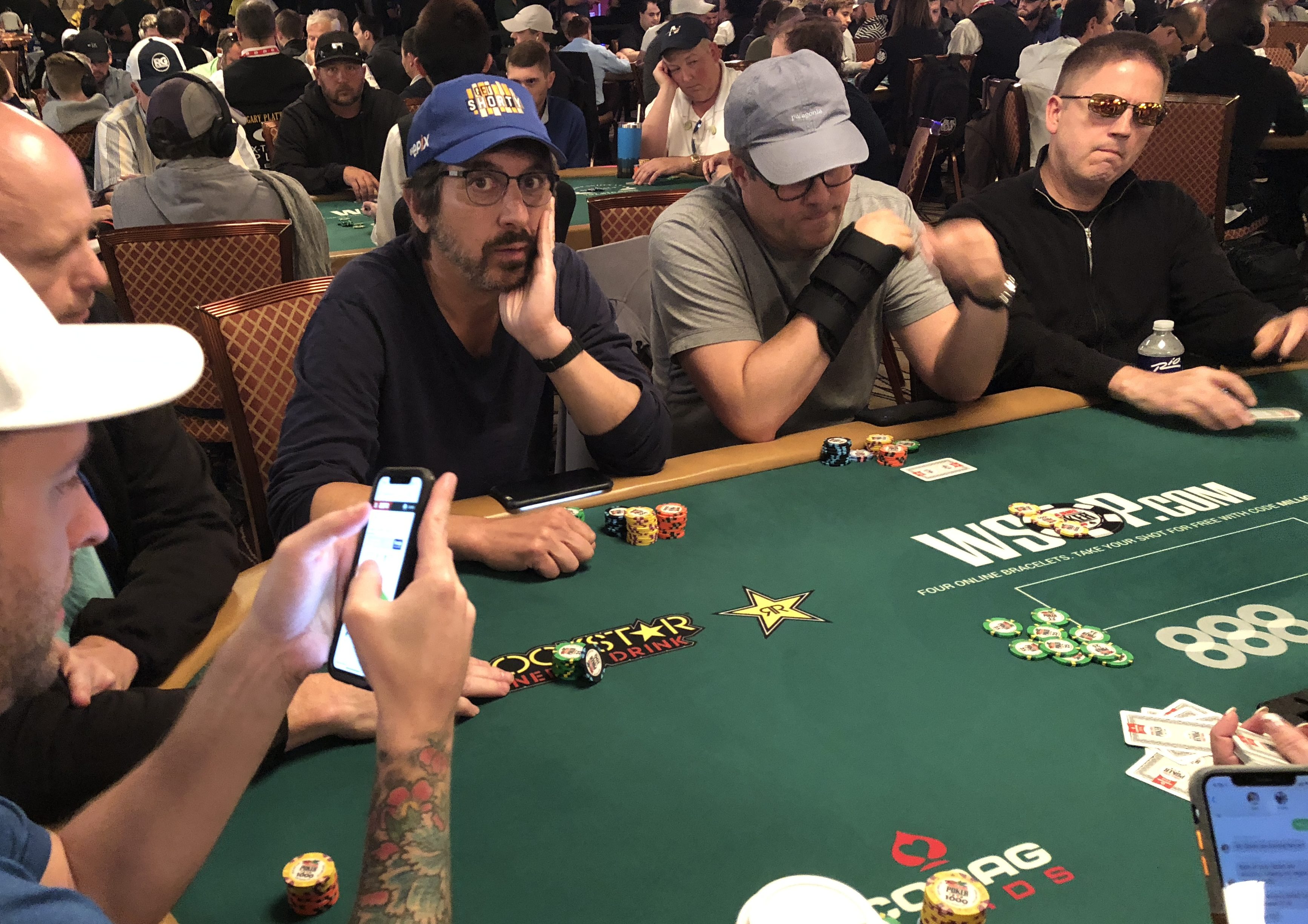 Emmett brought a marching band and showgirls with him to his table inside the Rio’s Amazon room at the start of Day 1A on Monday, a grand entrance that was heavily criticized by some annoyed poker players.

He left the band at home on Thursday but brought the showgirls out after the dinner break to pass out 1,500 ice cream bars to those in attendance. The nice gesture didn’t bring the filmmaker any good karma as he busted long before the session concluded.

Only 1,131 players out of the 2,460 who began the first of two Day Two sessions bagged chips on Thursday night, which included Romano, the star of the hit TV show “Everybody Loves Raymond,” but didn’t include his good friend, Pollak, who was eliminated late in the evening.

When Day Three begins on Saturday, Romano will have 71,400 chips (35 big blinds). He’ll likely start with a slightly below average stack but will have plenty of chips to spin it up and score his first Main Event cash.

Day 2AB consists of survivors from the first two Day One flights, while Day 2C on Friday handled players remaining from the record 4,571-player starting flight on Wednesday.

Michael Mizrachi, the now three-time WSOP $50,000 Poker Players Championship champion, has twice appeared on the ESPN feature table during the Main Event, and he’s undeniably good for television. His style of play – loose and aggressive – is enjoyable to watch.

Mizrachi played “any two cards” poker on Thursday, raising pre-flop frequently with cards most would just muck and consistently putting pressure on his opponents with double and triple barrel bluffs. He saw few hands he didn’t like.

Playing so loose, even for a world-class pro such as Mizrachi, is great for television but causes your chip stack to fluctuate throughout the session.

No surprise, The Grinder went from nearly 300,000 chips to finishing the day at 62,400. But if you think he has plans to tighten up on Day Three now that he has a smaller stack, you can forget about it.

I had a Great time at the Feature Table. Back to My Nitty wayzzzzz!!! NOT!!! Thank you all for tuning In ❤️. No More Robots..Enjoy the Grind ?. I’ll be back to run it up 62500. Final table here I come. Up for all Challenges. Good Luck. See you At the Final Table ??

A couple that busts poker tournaments together, stays together? Two of poker’s most popular couples saw Day Two Main Event action, with one couple moving on, and the other couple both going home.

Phil and Farah Galfond were both eliminated on Thursday. Farah has announced she will soon return as an actress on the daytime soap opera “Days of Our Lives.” Galfond first appeared on the show in 1999 as Mimi Lockhart but her character was killed off in 2007. Mimi apparently will be reincarnated after an 11-year absence.

Meanwhile, Kristen Bicknell and Alex Foxen, the couple that created some controversy earlier this summer when they finished 1st and 2nd in an MSPT event, both bagged healthy stacks.

Good Day for Past Winners

The above players will return to the Rio on Saturday at 11 am PT and will be joined by those who survive the Day 2C session on Friday. We should be down to the money by the end of Day 3.

The really interesting thing about this article for me is the notables stacks going to the next days play, incredible talent and its bubbling up for an epic final table.