WSOP Day Three was, again, all about the Colossus II, aka Event #2. The $565 buy-in tournament just might set the live tournament attendance record for all time, surpassing last year’s version, which drew 22,374 players. Through the first four of six Day One flights, Colossus II has already become the second-largest poker tournament in the history of the game. 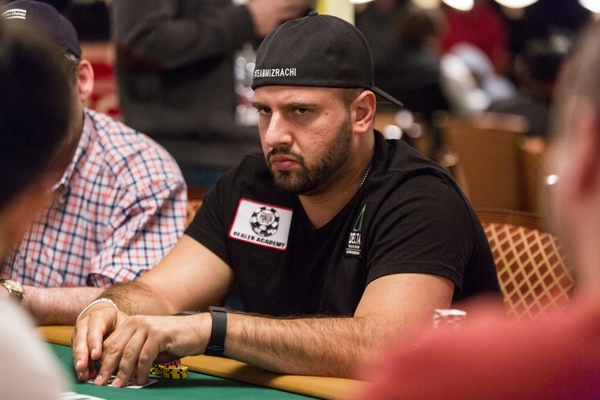 Michael Mizrachi assesses another player with a scowl as he plays in Colossus II in Flight 2D on Friday. (Image: pokerphotoarchive.com)

There were 12,871 entrants through the first 67 percent of Day One. One of those players was yours truly. I entered Flight 1C at 10 am on Friday.

This wasn’t the first time I played in the Colossus. I did so a year ago and made a fairly deep run. Last year, I held my head high when by the end of Day One, I had over 77,000 chips and was in good position to make some big bucks, before losing a crucial race and suffering a sick bad beat late on Day Two.

Still, in 2015, I finished in the money and won $2,100. This time around, I wasn’t so fortunate. My tournament lasted less than two hours.

My Brief Appearance in the WSOP

It started out well enough. In the first hour, I was able to push around the table. They were all playing tight and folding to my pre-flop raise or continuation bet. I managed to take my 5,000 starting stack to just over 10,000 about an hour in, without actually hitting any big hands. In fact, I think the best hand I flopped was bottom pair.

Feeling good about my play, I knew that I eventually was going to need to catch areal hand in order to cash. I finally caught that hand about 90 minutes in. I flopped two-pair in a heads-up pot with the player to my left, but was up against a set of deuces. I doubled him up and was down to 3,000 chips.

On the very next hand, with the blinds at 100-200 (25 antes), I had pocket tens in the small blind. Action folded around to me and I raised it up to 450. The big blind shoved all-in and, given my stack size, I simply couldn’t fold. He had pocket aces. I got no help on the flop, turn, or river and was sent to the rails. It just wasn’t my day. That’s poker.

The great Scotty Nguyen showed up to compete in Flight 2D and made it into the money. Scotty picked up a crucial double up just before the bubble burst. This year, 15 percent of the field on each flight are guaranteed to cash. On Flight 2C, 465 are guaranteed to take home at least $834.

Late in 2C, Barry Greenstein was eliminated, but the poker legend did score another WSOP cash. Allen Cunningham (75,000) is the only big name from this flight to advance to Day Two. Ben Lindemulder of Michigan finished out this session with the most chips (362,000).

Britain’s David Polop has the overall chip lead through the first three flights so far (513,000). Another Brit, Hector Rodriguez, is right behind him with 450,000 chips.

On Saturday, the final two initial flights, E and F, will take place. Sunday marks the beginning of Day Two. The winner of this event will take home at least $1 million.