On Monday, Robert Mizrachi proved once again that the Mizrachi brothers have some kind of poker magic in their veins, and he has plenty of his own. 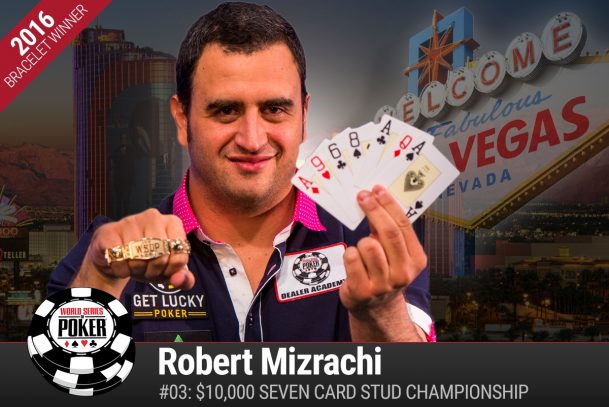 Robert Mizrachi did his clan of talented brothers proud with his fourth WSOP bracelet on Monday, in the $10K Seven Card Stud event. (Image: WSOP.com)

No one understands the importance of winning bracelets for legacy purposes more than Robert, of course. The brother of Michael Mizrachi has long been deserving of being referred to as his own man, not just the brother of “The Grinder,” and now his fourth World Series career bracelet just makes it all the more evident, after taking down Event #3, the $10,000 Seven Card Stud tournament.

Michael has an impressive three bracelets himself, so this fourth for Robert and now $5.9 million in total tourney cashes will give him some family bragging rights for sure. Michael maintains the family money lead with $14.87 million in total live tournament cashes, though.

Robert joins a list of only 11 players who have won three bracelets in this decade alone. He won his first back in 2007.

The $10,000 Stud event began on Saturday with 87 players, most of whom were top pros. Players such as Ted Forrest, David Benyamine, George Danzer, and Jeff Lisandro all finished in the money, but it was Mizrachi who took home the $242,662 top prize.

Colossus II started with 21,613 players. But, after Monday’s play, the $565 buy-in tournament is down to its final nine. One of these remaining players could go from a no-name to somebody, just like Cord Garcia did in the same event last year.

None of the final table competitors aren’t household names. In fact, the nine players have a combined zero WSOP bracelets, and just 13 career cashes between them.

The chip leader at start of play today will be Jiri Horak of the Czech Republic, and he’s already proved that he has mad skills at this event. Last year, he finished 125th out of 22,374 players and won $8,155. That was his only career WSOP cash to date.

Horak will enter today’s play, the last day of the event, with a commanding chip lead. He has 25,425,000 in chips. Benjamin Keeline of Illinois will be in second place with 19,900,000. The winner of Colossus II will take home a nice cool $1 million, and play resumes at 2 pm Pacific Time.

The Colossus isn’t the only final table set to take place on Tuesday. There are nine remaining players in event #5, the $1,500 Dealers Choice tournament, which included some top pros.

Outspoken actor James Woods is among the players who made it through Day One. The conservative activist who despises Barack Obama, Hillary Clinton, and pretty much anyone who represents the Democratic party has a chip stack of 84,200, which is above average. The chip leader, Roman Rogovskyi, has 188,700.

In event #7, 279 players entered and 52 are coming back for Day Two of three as well. John Monnette, Barry Greenstein, Bernard Lee, Jennifer Harman, Eli Elezra, Erik Seidel, David Benyamine, and Huck Seed are among the roster of star-power returning players. This should be an exciting match-up to watch.