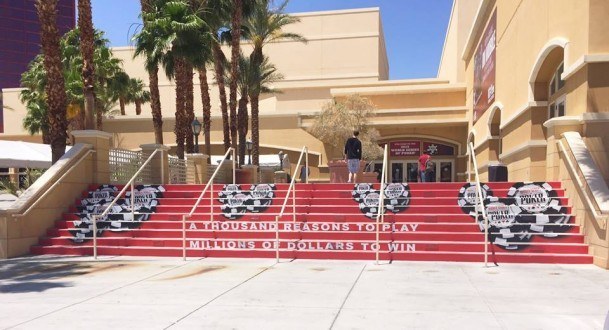 Thousands of  players climbed these steps to the Rio compete in the first two flights of Colossus on Friday, the largest-ever WSOP tournament in history. (Image: CardsChat.com exclusive)

Friday saw the first two flights of the Colossus played out, and as expected, the tournament halls at the Rio were filled to capacity with eager poker players, many of whom were getting their first WSOP experience. The day also saw the first bracelet awarded in an open event and the $3,000 Shootout played down to its final table. 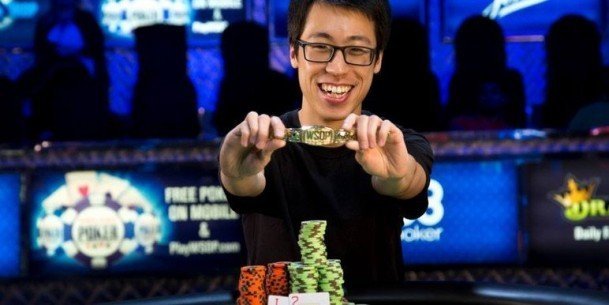 Michael Wang took down the NLH $5K event for the second bracelet of the series so far this year. (Image: WSOP.com)

Michael Wang won his first WSOP bracelet and the biggest prize so far awarded at this year’s World Series, $466,120, by taking down the $5,000 No Limit Hold’em tournament.

The event ended late Friday night, which was actually slightly early for a tournament that had originally been scheduled to stretch into Saturday on the official WSOP schedule.

Wang had no shortage of competition in the late stages: Amir Lehavot lasted all the way to sixth place, and Greg Merson hung around even longer, being eliminated in fourth. Wang ultimately had to do battle in heads-up play with Bryn Kenney, who was looking for his second WSOP bracelet (having won his first last year in a 10-Game Mix tournament).

Wang ultimately came out on top in a flush vs. flush confrontation, knocking Kenney out in second place for a $287,870 cash. It was a tough finish for Kenney, who had held the chip lead for most of the final table before Wang overtook him in heads-up play.

“I’m still trying to process it,” Wang told WSOP.com after his win. “This is the most prestigious prize in poker. This is the best thing in the game that’s ever happened to me.” 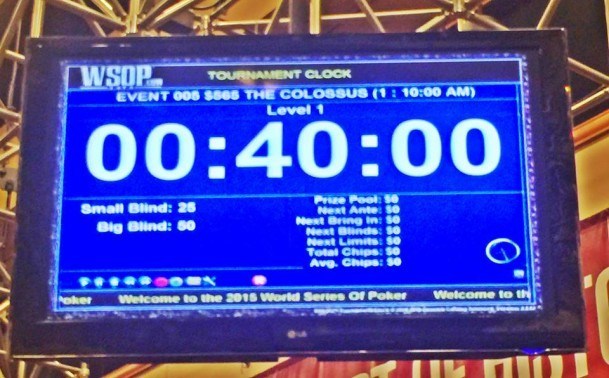 On the clock: the countdown to Colossus Day One, which ultimately saw more than 10K players compete, was a much-anticipated one. (Image: CardsChat.com exclusive)

Before the first two Colossus flights began on Friday, we already knew that they had both sold out, meaning that with the late wave registration available to players, it was likely that over 10,000 players would churn through the tournament. It appears as though that target was indeed eclipsed, though official numbers are still forthcoming from WSOP management.

Given the nature of the tournament, it’s not surprising that exact figures haven’t quite been nailed down yet. In Flight 1A, WSOP.com estimated that 5,300 players had taken part; in Flight 1B, they only said that more than 5,000 more participated.

Of those massive collections of poker players, only about 1,570 players made it through to the end of the day, and it can’t even be said for certain that all of those entries will move on to Day 2.

Short stacks could decide to abandon their chips and start fresh in one of Saturday’s flights, though it is unclear how many would take that option, and players who signed up for multiple flights but are happy with their stacks may also drop out of later flights, opening up a few more precious seats for players still trying to sneak into the field.

The overall chip leader after the first two flights appears to be Ian O’Hara, who bagged 184,000 chips in the evening flight. Plenty of pros ultimately decided to brave the massive fields as well, and some will be coming back for Day 2 on Sunday with healthy stacks, including Chris Moorman, David Pham, Ronnie Bardah, Dan O’Brien, Erick Lindgren, and Jeremy Ausmus.

The first two flights have already made the Colossus the biggest tournament in WSOP history, and there are still two flights to go. If the second starting day matches the first, the tournament should surpass 20,000 players, an astonishing number for a live tournament.

The $3,000 No Limit Hold’em Shootout was reduced from 40 players to 10, with each of the survivors having battled through a shorthanded table of four players in order to make it through the second round. The final 10 will now be battling for a bracelet and a $201,812 first prize. 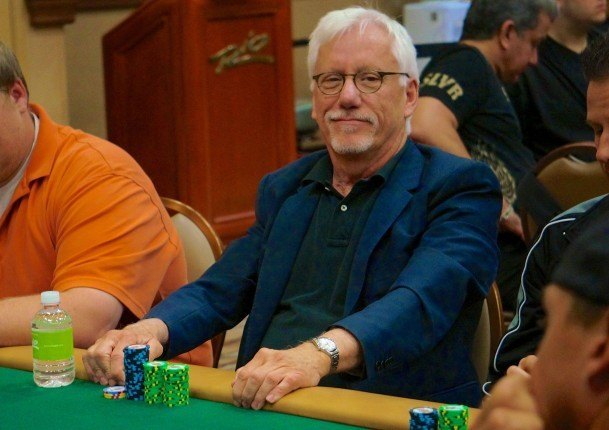 One of many Hollywood aficionados of poker, actor James Woods (shown here in 2013) was still in the running for a bracelet as we went to press. (Image: reddit.com)

The final table is full of pros, including three who have already won bracelets: Loni Harwood, Brian Lemke, and Leo Wolpert. However, the most attention of all may be on actor James Woods, who is known to be an avid poker player, but is still seeking his first WSOP bracelet.

Event #3, the $1,500 Omaha Hi/Lo tournament, is also reaching its later stages. Only 49 of the 918 players who started the tournament are still alive, and it is Kelly Vandemheen who has grabbed a massive chip lead, holding nearly double the stack of his closest opponents.

There’s still plenty of work to be done, though, and more than a few dangerous opponents left: Eric Wasserson, Robert Mizrachi, and John Monnette are still in the field, among others. The remaining players are fighting for a $251,022 prize, and have already clinched at least $4,573 in prize money.

Saturday will once again be dominated by the Colossus, as starting flights 1C and 1D will be held. Once those are completed, we should finally have official totals for the tournament, including a look at the massive prize pool that the thousands of players who make it to Day 2 will be competing for.

In addition, the $3,000 No Limit Hold’em Shootout will play out its final table. Because of the presence of James Woods and a number of notable pros, it’s possible that there could be a lot more viewership than normal for such an early event, provided everyone who is interested isn’t playing in the Colossus instead.