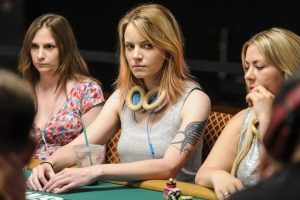 American Cate Hall (center) got lucky when her pocket 77s hit a set on the flop, bumping her pre-hand stack from 17,400 up to 72,000 just before midnight on Saturday. (Image: pokerphotoarchive.com)

WSOP Day Four was all about chasing records and another major tournament getting underway. Starting with Event #2, Colossus II, many at the Rio were paying attention to the number of players registered. Last year’s Colossus had 22,374 players which set a live poker tournament record.

But this year’s event didn’t quite get there. With 21,613 players, the tournament easily became the second largest field ever, so it has that going for it. However, Colossus II did set one record. There were 3,245 players who cashed, the most ever in a single live poker tournament.

After six Day One flights from Thursday to Saturday, Colossus II is now on to Day Two Sunday. There are 847 players remaining with three more days of play to go. The action picks back up on Sunday at 2:00 pm.

The men dominated the Colossus field, but there were still many females who entered. That includes Jessica Dawley, an 888poker pro. She fired six bullets at this tournament and came away with nothing.

Cate Hall, one of the most talented women in the game, said on Twitter she spent 32 hours playing in the event. She cashed in Flight 2F but did not move on to Day Two.

Most top pros avoided the Colossus because the buy-in simply isn’t high enough and the field is too large. But Event #3, the $10,000 Stud tournament brought in many of the game’s best players.

Daniel Negreanu made his 2016 World Series of Poker debut but didn’t make it to Day Two. Brian Hastings, the defending champ, decided not to head to Las Vegas in time for this event.

But the main story in this one was the return of Chris “Jesus” Ferguson. The former Full Tilt Poker executive and poker pro made his first appearance in the WSOP since prior to the Black Friday scandal in 2011. No altercations between Ferguson and other players were reported, but many poker pros still don’t want him to be allowed in card rooms.

Ferguson has never issued a public apology for his alleged actions at FTP but his fellow executive Howard Lederer recently did. Following his apology, many in the poker community expected him to play in the WSOP this year. Thus far, he hasn’t been spotted at the Rio, but Ferguson has, and still no apology. Maybe later in the month one will come.

First place pays $242,662 and a coveted gold bracelet. This is a three-day event, with play resuming at 2:00 pm on Sunday and Monday.