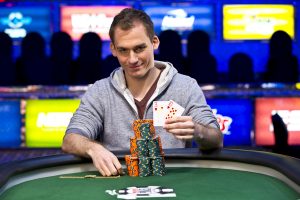 Just days ago, Justin Bonomo finished second at the World Series of Poker’s Event 5 to Tuan Le. In 2011, he finished second yet another Triple Draw tournament. In 2008, he took second in a Hold’em mix event. He’s also made several other WSOP final tables, finishing in fourth a few times. The “always the bridesmaid” saying was fitting Bonomo like a bad tuxedo.

On June 4, Bonomo exchanged it for a lovely gold bracelet and first place WSOP finish. The $1,500 NLHE Six-Handed title was his after overcoming a large chip deficit and working for hours to defeat Mike Sowers. It was a sweet victory for Bonomo.

Today will be the day to keep an eye on Event 13, as Daniel Negreanu and Jason Mercier battle other well-known players, like chip leader Paul Volpe, to capture the championship title.

The first six-handed event of the 2014 WSOP started on Monday with quite an impressive field:

Day 2 thinned the field from 151 to 10, but the final table was still a few players away.

Day 3 ousted players like Todd Anderson and Viet Vo on the way to setting the last six-handed table, at which point Mike Sowers was still the chip leader. Contender Taylor Paur exited first, and the two leaders – Sowers and Justin Bonomo – took their battle to heads-up. Sowers started ahead, but Bonomo was determined and used all of the tools in his playbook to emerge as the winner.

Some say Pot Limit Hold’em is a lost art, but this event offered it with solid results:

Day 2 started with only 69 players, but pot-limit games can take some time. The bubble burst right away on Day 2 to guarantee $2,443 payouts with Jacob Bazeley as the first to claim one, but it took quite a while to move forward. Players like Anthony Gregg and Ryan Riess departed later in the evening.

The final table of nine was set late that night with Kazu Oshima in the chip lead, but play continued. Phil Collins ended up busting to Gregory Kolo to take home $12,610. Action then stopped with eight players, who were positioned as follows for the final day:

This championship event had the exact same registration numbers as the previous year, which were as follows:

Despite her initial dominance and Day 1 chip lead, Jennifer Harman exited early on Day 2 as the field of 36 played toward the final table. Galen Hall left on the money bubble, and Jon Turner and Mike Watson were the first to cash for $16,601. Greg Mueller and Joe Cassidy followed, as did Ashton Griffin and Darren Elias.

The unofficial final table began late in the evening with Daniel Negreanu in the lead, Rep Porter lost a lot of his stack during that time, ultimately eliminated by Paul Volpe for an eighth place finish worth $22,399. The final table was then ready as follows:

The sole tournament on the June 4 schedule was a non-Hold’em low buy-in event, and it absolutely crushed with big numbers. When registration closed, this was the tally:

The field diminished rather quickly on Day 1 but left 220 holding chip bags at the end of the night. The money bubble was still in the distance, but these five players were somewhat comfortable with their chip stacks:

On Tap for June 5

Events 12 and 13 will play out their final tables.

Event 14 will aim to set its final table.