And that’s exactly where he finished. 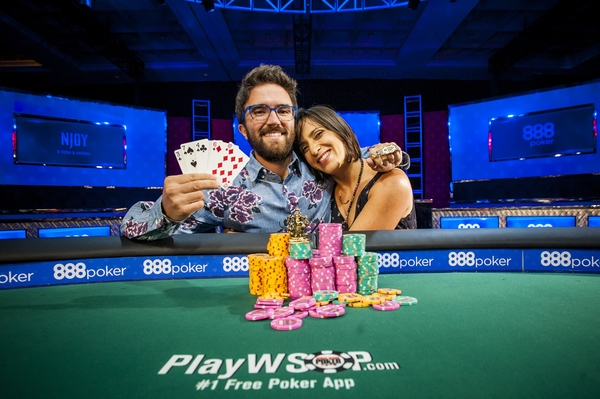 D’Angelo, who had 18 career WSOP cashes before Wednesday’s final table (including a 3rd-place finish in the $2,000, NLHE WSOP bracelet event in 2008 for a $326K payday), bested runner-up and fellow American John Monnette for his first career WSOP bracelet Wednesday.

D’Angelo’s breakthrough win notched him $92,338 for his efforts, while Monnette, a feared high-stakes cash game player, had to settle for second and $57,061. The Binghamton, New York player bested a field of 279 players.

D’Angelo started the final table with 499,000 in chips, and shortly before that achievement, the 30 year-old poker pro kinda-sorta “Babe Ruth-ed” the win with this tweet:

“Made the final table as chip leader in event 7 2-7 Nl single draw! Such a fun tournament, looking forward to winning my first bracelet! ?”

Less than six hours later, that’s exactly what he did, beating out the likes of poker legends “Captain” Tom Franklin (who took 3rd for $38,582) and Barry Greenstein, a Poker Hall of Famer who finished 9th for $5,781.

“I love this game,” D’Angelo told Cardplayer.com afterwards in an interview, where he also revealed he would be donating a portion of his winnings to the charity Food Gardens Foundation in South Africa.

“I never would have guessed that my first bracelet would come in this game, because I play ten no-limit hold’em events for every one other game. I feel almost a connection to this form of poker. . . It’s so pure because it is only two streets, before the draw and after the draw. It’s just ‘Do they have it or don’t they.’ It’s all metagame and leveling.”

As for why he chose to give some of his WSOP paycheck to a charity halfway around the world, D’Angelo said he’s deeply passionate about helping this type of cause.

“We provide seeds to people in South African townships and help educate people about how to grow food,” D’Angelo said. “It’s just a great way to help people turn their lives around.”

International Field Plays Down to Four in $1,500 NLHE

On Wednesday night, six different countries spanning four continents made up the final table of the World Series of Poker’s Event #6, the $1,500 NLHE tournament, as Australian Michael Addamo carried the chip lead into Thursday’s finale. It had been scheduled to play down to a winner on Wednesday, but instead will finish out play today.

Addamo ended Day Three with 6.5 million in chips, nearly double that of American Davis Aalvik, who bagged 3.6 million. Sitting in third place at start of Thursday’s play is Swede Peter Eichhardt, with a 2.6 million-chip stack, followed by arguably the most-feared player left in the field in fourth place in American John Racener, the 2010 WSOP Main Event runner-up.

Aside from Racener (who can brag $9 million in career earnings), easily the other most accomplished player to make the final table was WSOP bracelet winner and fellow American Anthony Zinno (with $5.9 million in career earnings). But Zinno, who was shortstacked for much of the final table, was bounced in 8th ($45,582) when his pocket jacks lost a coin flip against the A-K of 6th-place finisher Bruno Borges of Brazil.

For Timothy Farrelly of Ireland, Event #6 marked his third WSOP cash ever, but two of them have come in this year’s series. Farrelly finished 55th just four days ago in Event #4, the $1,000 NLHE Top-Up Turbo, and then took 5th on Wednesday. His largest career payday of $106,115 for this finish nearly matches his entire prior career earnings ($130,510).

Other final tables cashes included Argentina’s Richard Dubini (9th for $32,521). When the tournament reached the final two tables, Dubini actually held the chip lead with 1.6 million in chips, which was 600,000 more than his closest opponent. But he couldn’t maintain it.

Notable Day 3 busts included top pro (and Day Two chip leader with 997,000) Justin Young, who suffered a brutal beat against Farrelly that crippled Young’s stack and ultimately led to him being shown the door in 22nd place ($13,786).

Young called down Farrelly’s bluff-shove after the flop of 551,00 on a board of 10♠8♥7♥ with Farrelly holding A♣Q♠ against Young’s 9♦9♥. The turn brought the Q♦ and held, dropping Young to 330,000 in chips. One hand later, he busted when his Big Slick ran into pocket fives and couldn’t connect on the preflop coin flip.

Young, who has $4.3 million in career tournament earnings but has yet to sweep an actual gold bracelet, tweeted this about the disappointment of falling short once again: 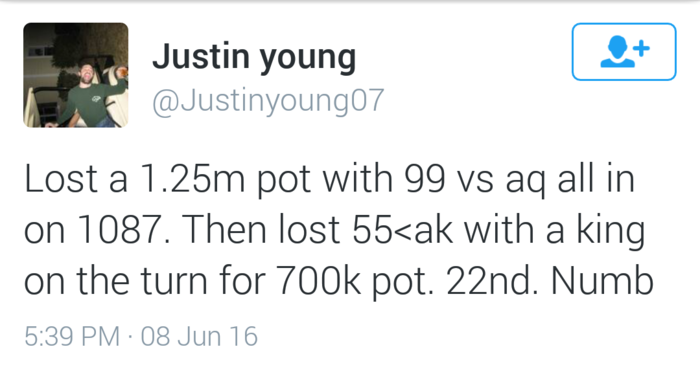 Justin Young tweeted out his pain after a classic bust on Wednesday in Event #6, the $1,500 NLH. (Image: Twitter)

Event #9, the $10,000 Heads-Up Championship, which started with 153 players, was whittled down to the final four on Wednesday. And some of the marquee matchups on Day Two didn’t disappoint.

The headliner was renowned heads-up specialist Olivier Busquet, who emerged from a tough part of the bracket by beating Chance Kornuth, Jared Jaffe, and Orlando Romero to reach the semifinals.

Today at noon Pacific time, Busquet, who has $6.8 million in career earnings, will go for his first career WSOP bracelet when he faces off against Alan Percal, a relatively unknown player who has never cashed in a WSOP event and has less than $40,000 in career earnings.

In the other semifinal will be 69-year-old highway contractor John Smith taking on Alex Luneau, who is guaranteed his biggest cash to date no matter where he finishes.

Notable busts on Day 2 were Antonio Esfandiari, who finished 11th for $24,596 after he was knocked out by Smith in the Round of 16.

In the tournament that some say determines the mythical title of “Best Overall Player in the World,” renowned French pro Bruno Fitoussi grabbed the lead with 318,700 in chips after Day One. Fitoussi, who is 8th on France’s all-time money list with $2.7 in career earnings, is still chasing his first WSOP bracelet after famously coming oh-so-close in the WSOP $50K H.O.R.S.E. Championship in 2007.

The winner of the tournament that features 19 different poker disciplines, with each player choosing the game when it’s their deal,  will have to wade through a field of 118 entrants that registered on Wednesday. After Day One, play was stopped Wednesday night with 41 players left and picks back up at 2 pm at the Rio today.

He will hold a slight edge over second-place chip stacker Canadian Eric Afriat (208,000) and third-place Italian pro Niccolo Steffanini (187,900) when play resumes at noon on Thursday.