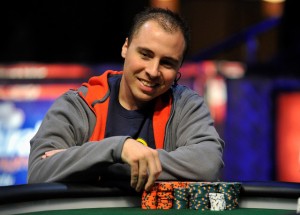 Day 8 offered three final tables to watch, and fans didn’t hesitate to log on to the live stream or head to the Rio to check them out.

Jonathan Dimmig won a hard-fought battle to claim the Millionaire Maker title and take home more than $1.3 million. He told WSOP that it was the best day of his life and a once-in-a-lifetime experience. The Buffalo native was surrounded by friends when he won.

As the $10K Lowball tournament plays on, expect a big rail as Jen Harman starts Day 2 as the chip leader and competes against many other big names in the game.

The final day wasn’t kind to the initial overwhelming chip leader, Stephen Graner, as he busted in sixth place. Andrew Teng took fourth place. Heads-up play began with Jeffrey Coburn with a 2-to-1 chip lead over Jonathan Dimmig, but the latter doubled through on the very first hand. Dimmig took it from there, and a few hands later, he took 6-2 on a 3-3-2 flop against the K-Q of Coburn and became a millionaire.

Another rather large event at the WSOP played out in Event 9, which started with these numbers:

By Day 3, there were still 12 players remaining, and play moved quickly as Vinny Pahuja, Dylan Linde, and Cornel Medes exited to leave only the final table. Chris Hunichen was the chip leader but exited in sixth. The heads-up match was tense and lasted for several hours with the two finalists exchanging the chip lead numerous times. Ultimately, it was Jeff Smith who emerged victorious.

This new championship event started with an impressive field:

There were still 18 players, albeit all in the money, at the tables at the start of Day 3, and play moved forward as Perry Friedman accepted 18th place for $23,742. Jeff Lisandro, Tom Koral, Doug Polk, and Eli Elezra exited early as well.

The official final table boasted two women in contention for the title: Shirley Rosario and Melissa Burr. After Dan Kelly busted in ninth, though, Burr took eighth, and Rosario ended up leaving in fourth place. Brock Parker eventually took the lead into heads-up play against Richard Ashby and pulled out a win.

The first six-handed event of the 2014 WSOP started with these stats:

Day 2 brought 151 players back to action, all in the money, and thinned the field down to 36 players by the dinner break. As players like Noah Schwartz and Jason Wheeler exited, the final table neared. Corey Burbick was out in 13th, and not long after Ryan Hemmel took 11th place, play ended for the night.

There were 10 players remaining with some very recognizable faces still in contention. The top five chip counts were:

The first Pot Limit Hold’em event of the Series was a solid one, and the final registration numbers were as follows:

In a game that proved slightly more popular than the year before, the day moved quickly and reduced the field to just 69 players. The minimum payouts are $2,443, and the money bubble will burst quickly on Day 2. The top five on the leaderboard, who are unlikely to bubble, were as follows:

There are very few players, relatively speaking, who would plunk down $10K for a shot at a 2-7 Lowball championship title, and there were exactly 87 of them. Ironically, this was the same precise registration number as the year before:

The big poker names were quick to come and go, but 36 of them stayed around with chips to bag at the end of the night. The top five were led by none other than Jen Harman:

On Tap for June 4

Event 11 will play to and through its final table.

Events 12 and 13 will try to set their final tables.