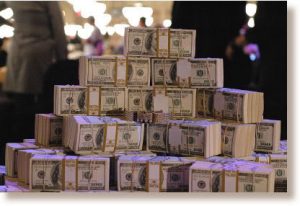 Fans of poker and friends of players watched with anxious excitement as the World Series of Poker Millionaire Maker tournament neared its final table. The tournament took longer than expected to play out, but a late night of poker produced nine finalists, one of whom will win more than $1.3 million. With names like Andrew Teng and Maurice Hawkins in the running, the rail at the Rio stage today has the potential to be electrifying.

Only one new tournament was on tap for Sunday, which was a bit unusual. However, it was a six-handed format with only a $1,500 buy-in, and the tables were necessary for what they hoped would be a solid turnout. The final numbers were stellar, eclipsing last year’s registration by more than 500 players.

The largest one-day tournament in history started on Saturday with these numbers:

Day 2 thinned the field from 1,466 players to 178, and Day 3 played down further. What was supposed to be a three-day tournament was extended to four, as the only realistic goal for the third day was to determine the final table players.

Along the way, competitors like Matt Salsberg, Dwyte Pilgrim, and John Racener exited. And it was finally after midnight that Michael Stembera pushed with A-K against the K-J of Bradley Anderson and lost when a jack hit the flop. Stembera took home $100,689 for tenth place, and the final table was set with Stephen Graner as the overwhelming chip leader.

The second $1K NLHE tournament of the series was another exciting one to watch, having started with these stats:

There were 161 players who started Day 2, all of whom were guaranteed at least $2,147 for making it into the money. Some of the bigger names to fall throughout the day were Shannon Shorr, Kyle Cartwright, Dominik Nitsche, and Faraz Jaka.

The tournament went until well after midnight in search of a final table. Eventually, Rene Angelil, husband of Celine Dion, ended up risking his short stack with J-4 but lost to the A-9 of John Fontana. Angelil collected $14,579, and the final 12 were led by these five on the leaderboard:

A $10K buy-in means it’s a championship event, and this was a new one on the 2014 WSOP schedule. The Omaha-8 tournament began with these numbers:

Day 2 looked daunting with 111 players taking their seats, and it became clear late into the evening that the final table would not be set. Some of the departures late into the night saw players like Daniel Negreanu, Mike Wattel, Jon Turner, and Marco Johnson hit the rail. Frankie O’Dell was the shortest stack on the bubble and lost to Dan Kelly and Viatcheslav Ortynskiy to exit in 19th place.

That left 18 players to play for the win on Day 3, and the top five chip stacks belonged to:

Six-handed has become a popular format, especially for No Limit Hold’em players. This year, the $1,500 buy-in of the variation was a bit later on the schedule than in 2013, but it paid off as the registration in 2014 exceeded the last year by more than 500 entries:

The play was fairly quick on Day 1, thinning the field enough to hit the money by the end of the night. Nearly a dozen players headed to the cashier cage before play stopped with 151 bagging their chips. The top five on the leaderboard were:

On Tap for June 3

Event 8 will play its final table and declare a new WSOP millionaire.

Events 9 and 10 will set their final tables and play for the win.

Event 11 will aim to reach a final table.