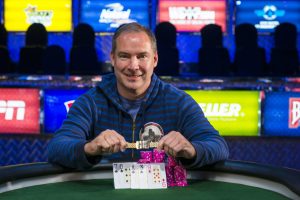 Razz was the story of the day. One of the best stories of the 2014 World Series of Poker thus far was that event, which featured some big names in poker. And the final two left standing were Ted Forrest and Phil Hellmuth. The latter desperately wanted his 14th bracelet, while Forrest was ready to take down his sixth.

In the end, a strong heads-up battle led to Forrest claiming victory, and Hellmuth was kind in defeat, tweeting, “Congrats to my old friend Ted Forrest on winning #WSOPRazz tourn. If I had to lose to someone, I’m glad it was Teddy.”

Forrest was also gracious, taking the microphone after the match to bestow praises on Hellmuth.

Meanwhile, Brandon Cantu, who exited earlier in that tournament, had a visibly frustrating day. He then launched into a confrontation in the Rio hallway with Jeffrey Lisandro, resulting in Cantu being escorted off the property. Lisandro later revealed that he vouched for Cantu with regard to a loan that Cantu is now in trouble for not paying back. Lisandro alluded to a gambling problem with regard to Cantu.

The other news of the day was that Humberto Brenes, Team PokerStars Pro and Costa Rican poker legend, cashed in his fourth tournament of the summer. He has only played four events thus far.

A shootout tournament makes tracking the progress of the tournament quite simple. Day 1 was Round 1 and thinned the field to 120 players and into the money. Day 2 was Round 2 that found the final 10. Day 3 was the last of the action, though it all started with these numbers:

Jared Jaffee was the first player to exit, and the eventual elimination of Colin York in tenth place set the official final table, at which point Dimitar Danchev had the chip lead. The day’s original chip leader, Steven Loube, left in fifth place, and Josh Arieh was denied a third WSOP bracelet when Alex Bolotin eliminated him in fourth.

Danchev took care of Jon Lane in third place, but it was Bolotin who took the lead into heads-up play. The battle was intense, but Bolotin came out on top with K-8 over Q-J to claim his first bracelet.

This turned out to be one of the most watched of the WSOP thus far, with Phil Hellmuth seeking his record 14th bracelet. It started with these numbers:

Day 3 brought a final table of eight back to the Rio. Brandon Cantu took quite a few hits early on and exited in seventh place. Brock Parker followed, as did David Bach. Hellmuth soared and led three-handed play, ultimately eliminating Greg Pappas in third.

He took 1.06 million chips into heads-up against Ted Forrest, and the latter climbed into the lead. Hellmuth recovered, and the two played for several hours before Forrest claimed his sixth WSOP bracelet.

Day 2 began with 1,466 players, and nearly 600 of them departed in the first two levels of the day. The bubble was a hectic situation with so many tables in play, but the staff started hand-for-hand at just the right time. One hand later, two players were eliminated at the same time, and Anthony Harb and Jeff Dumas split 819th place money for $2,692 each.

Payouts were fast after that, with 100 players exiting within the next half hour, prompting the staff to call an early break to catch up. Players like Matt Glantz, Mike Sexton, and Loni Harwood headed to the cashier cage, and play continued until only 178 players remained.

What was meant to be a three-day tournament is likely to run into a fourth day. And though full chip counts were not released as of 8am, the top three on the leaderboard were listed:

It was no Millionaire Maker field, but the $1K NLHE did quite well on Sunday. When registration ended, it showed this:

Only 161 players made it through the day, but they were all in the money and guaranteed at least $2,147 in cash. The top five on the leaderboard:

The second $10K championship event of the Series brought in solid numbers and quite a few recognizable faces:

Only 111 players survived the excitement, with plenty of big names still in the running for a championship title. The top five on the leaderboard were:

On Tap for June 2

Event 8 will play down as far as possible but will likely not finish the tournament as planned.

Events 9 and 10 will play toward their final tables.