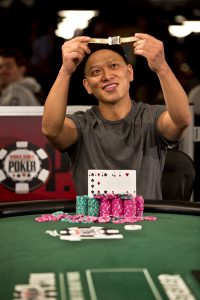 Tuan Le waited quite a few years for this one. (Image: WSOP)

The Millionaire Maker was the story of the day, as players lined up the night before and the morning of the tournament to register. With $1 million guaranteed for the winner and a single reentry allowed per player, the excitement in the Rio was palpable.

Ultimately, the Rio was filled to capacity with players. Tables were located in the casino, and the three ballrooms were completely filled, with cash games, satellites, and the daily tournaments on hold until the field could be thinned to a manageable number. While some predicted the field would top 8,000 or more players, it came in just under that estimate, but still made quite a few WSOP staff members very happy.

The aftermath is still being sorted this Sunday morning, but in the midst of it all, Tuan Le and Kyle Cartwright claimed WSOP bracelets and will collect them today at the bracelet ceremony.

When the first $1K NLHE tournament of the series began, these were the important numbers:

Cartwright had an even more substantial lead when the official final table of nine was set, and he took that through 155 hands to victory.

The first $10K championship event of the Series began with these figures:

Day 2 reduced the field from 54 players down to only 12, and Day 3 saw some of the biggest names in poker battle for the title. David Benyamine was the first to fall early in the day, followed by Jon Turner, and Jason Mercier fell short in ninth place.

Justin Bonomo was strong throughout the final table, while 2013 2-7 Triple Draw champion Eli Elezra exited in third place. Bonomo took a slight lead into heads-up play against Tuan Le, but the latter was a strong force and earned a hard-fought victory.

Round 1 kicked off Day 1 with 120 tables of sit-n-gos. These were the original tournament numbers:

Day 2 hosted those 120 players who won their tables, all of whom were guaranteed at least $4,411 at that time. And the tables played out over the course of a very long Saturday. In the end, only 12 players remained with Josh Arieh and Jared Jaffee among the finalists.

Every player moved forward with approximately 350K chips, but a few had a slight chip advantage:

Whether players love Razz or hate it, quite a few of them turned out for the first Razz of the WSOP this year, bringing the totals to:

A long day of play on Day 2 reduced the field from 75 players down to the final table, a place where Phil Hellmuth will attempt to win his 14th bracelet and others like David Bach and Ted Forrest will try to stop him. The final table chip counts are:

When play stopped, there were no official numbers as to how many players remained, and the complete counts were not released either. Per the latest update from the official reporting team, two of the top stacks were:

On Tap for June 1

Events 6 and 7 will play to the final table and for the win.

Event 8 will thin the still-massive field and attempt to come close to a final table.