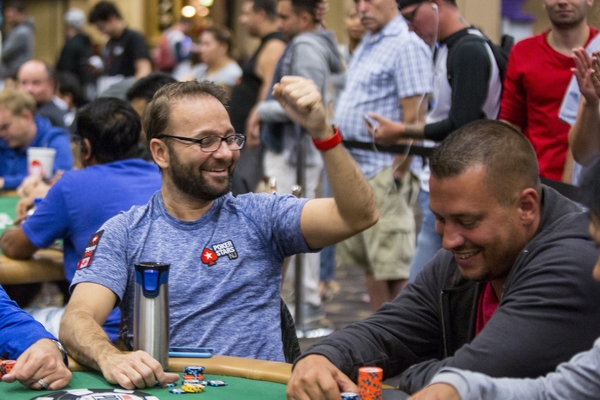 Others still alive include defending champ Joe McKeehen, who is sitting pretty with 183,900, and former Main Event champs Ryan Reiss and Phil Hellmuth, who bagged 349,000 and 82,300 each, respectively.

Two of the biggest names to hit the rail late in the day were Daniel Negreanu and Phil Ivey. The former, who had been working with a short stack most of the day, fell after getting all in with black pocket nines against Ryan Leng’s ace-queen. The flop brought an ace, and when no red nine hit on the turn or river, Negreanu’s hopes of improving upon last year’s 11th place finish in the Main Event went out with him.

As for Ivey, he put his tournament life on the line with an open-ended straight flush draw. Unfortunately for him, Jamshid Lotfi called with ace high, which held up when both the turn and river blanked.

Vanessa Rousso, who missed out on last year’s Main Event due to her memorable appearance on the TV show Big Brother, was also out before end of day Wednesday. As were many other household names, including Poker Hall of Famers John Juanda and Erik Seidel, 2014 WSOP Player of the Year George Danzer, and comedian Brad Garrett. And former Main Event champs Joe Hachem, Chris Moneymaker, Joe Cada, and Martin Jacobson also all busted as well.

Our own Ryan Laplante, who earlier in the series won his first gold bracelet and subsequently participated in CardChat’s $888 Crazy Eights competition, was eliminated from play yesterday also.

Dababneh Leads After Day 1B of Little One

The surviving players will return at 2pm PT on Friday, while those who busted, such as Anatoly Filatov, Cate Hall, and Natasha Barbour, will each have the opportunity to try again in Thursday’s third and final starting flight at 3 pm Pacific time.

While most media outlets have focused on the poker action, ESPN took notice of the latest phenomenon to strike the world at large, Pokémon Go, a location-based AR (augmented reality) mobile game. Basically, people use their phones to chase virtual Pokémon in whatever locale they happen to be in.

With Pokémon Go insanity sweeping the nation, ESPN wasted no time honing in on the action by plastering PokeStops all over the Rio in Las Vegas. (Image: Tim Fiorvanti/ESPN)

Gavin Griffin, Brian Vickers, and Chris Lindh were just a few of the players chasing Pokémon at the WSOP. Justin Bonomo, who finished runner-up in the $50,000 Poker Players’ Championship, even got in on the chase during a dinner break.

There’s no denying the Pokémon Go craze is sweeping the nation, but it’s not always pretty. In fact, police in some jurisdictions have warned players that chasing Pokémon is no excuse for trespassing. When it comes to the WSOP, Mike “Timex” McDonald wondered: how far it too far?

“How rare does a Pokémon have to be to justify having your camera out in line for the urinal?” he asked on Twitter.

With 151 Pokémon available, ranging from common to legendary, we’re going to say none are worth chasing in a public bathroom, except for Mewtwo, of course.

What’s on Tap for Thursday

For the first time in this year’s Main Event, all remaining players will play under one roof. Day Three will see the surviving 2,176 players return at noon PT. Some predict the money bubble will break late in the day, though others think it won’t be until Day Four. Whatever the case, once the money is made in the top 1,011, players will be guaranteed a $15,000 minimum payday.